In medieval sources Kumlinge is mentioned as chapel under the mother church of Sund, but already in 1478 the church in Kumlinge appears as a church in an independent parish.

According to the will of Kort Hartvigsson, from 1484, the church of Saint Anne in Kumlinge was to receive donations. The church has a strangely isolated location centrally on the main island of Kumlinge, separate from the village and today also far away from the sea. 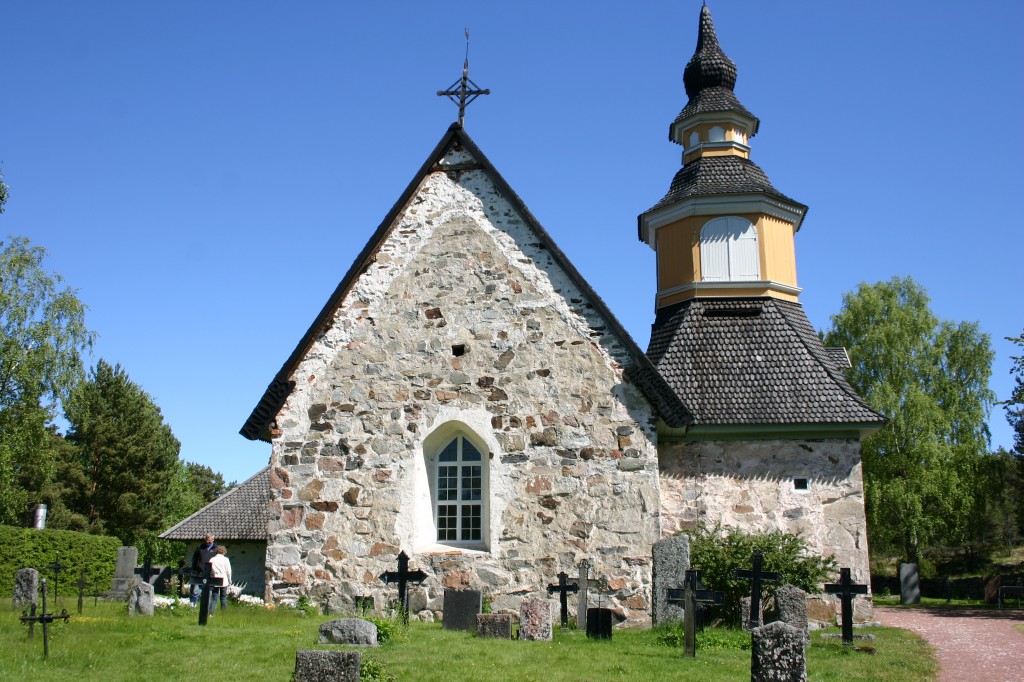 Exterior from the west. 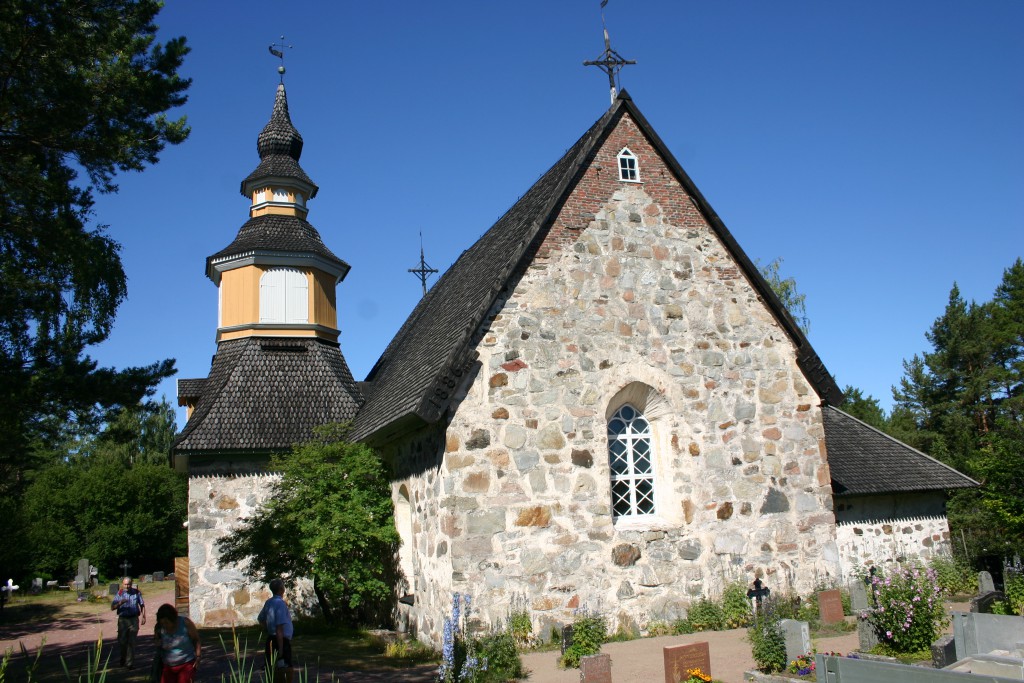 Exterior from the east.

Different from other Åland churches, the church in Kumlinge is not built in red granite. Instead rough and irregular walls executed in differently colored fieldstones dominate the exterior. Both gables reveal secondary heightening of the roofs. The year 1785 is inscribed in one of the rafters towards the west. The south façade shows that two enlarged round arched window openings have been moved from their original places. The gable walls have one window each. The chancel window in the east has a pointed arch, while the west gable window is round arched.

A tower south of the rectangular nave is crowned by a Baroque swollen spire with an onion cupola. The lower part of the tower, the porch, is not in alignment with the nave. Like the nave, it is erected in fieldstones, without obvious shifts. The roof of both nave and tower consists of tarred wooden shingles. The bell stage is painted yellow with white sound openings. A spacious sacristy has been erected against the northern wall of the nave. West of the sacristy one can see traces of a walled-in northern window. 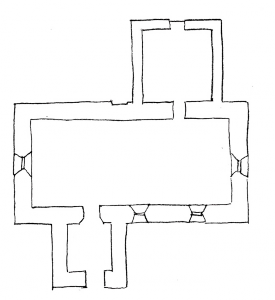 The ground plan consists of a single nave, divided into three bays, and in the nave and the south tower the walls are thick. The inner measures of the nave are 17.11m x 7.37m and the porch against the southern wall measures 4.17m x 3.85m. The sacristy towards the north, with walls of a thinner construction, consists of a square with inner measures 6.23m x 6.23m. In all, the nave has four window openings, two facing south and one in each gable. The portal of the porch is the only entrance to the church. The sacristy has a northern window. The attic of the nave can be reached through the walled-in staircase in the west wall of the tower. 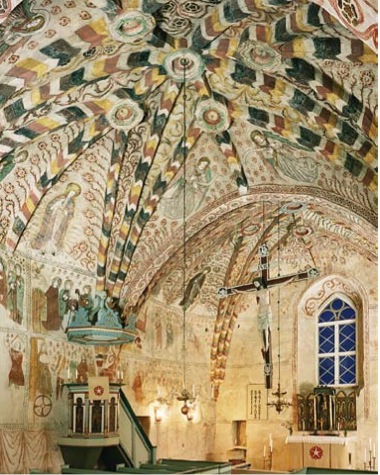 The vaulted room is dominated by wall paintings covering vaults and walls. Three rib vaults in brick form richly modeled ring vaults, where the intersection points are marked by five rings, forming ring vaults. The inner walls lack supporting arches* for the vaults, which instead rest on brackets* in the walls and in the inner corners. The inner height from floor to head of the vault measures 7.42m. 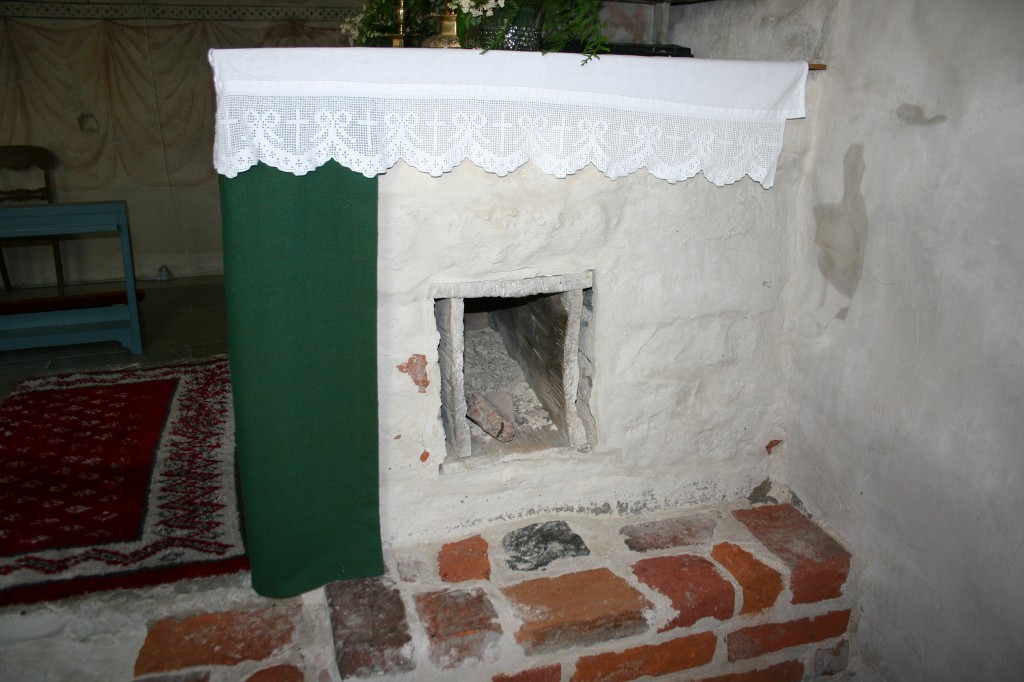 The high altar, erected against the eastern chancel wall, has a deep paneled niche in the south. Dendrochronological dating places a pine plank from the niche in the 14th century. The altar is covered by a wide limestone slab with an inscribed ring cross. An identical ring cross is repeated in the semi-circular limestone slab forming a step in front of the altar. An early medieval Mary shrine dominates the altar. Two niches in the eastern wall flank the altar on both sides. North of the altar stands a small limestone font, with a tree trunk as a base.  The crucifix hangs high up in the room. The pulpit, close to the sacristy portal by the northern wall, has a polygonal basket divided into mirrors. It is adorned with paintings of Salvator Mundi, the evangelists Matthew, Luke, Mark and John, and Peter, the apostle. An organ, built by the organ factory Wirtanen in 1963, occupies the southeast corner of the nave.

The ceiling of the porch has a barrel vault in fieldstones. For the ringing of the bells the vault is penetrated by three holes, lined with wood. Thus the combined function of porch and bell tower seems to be an original arrangement. A walled-in stone slab, protruding from the eastern wall of the porch, further indicates that the porch may have served as a chapel with a side altar. The ceiling of the sacristy has flat wooden paneling.

Stylistically, the wall paintings in the nave of Kumlinge church belong to the end of the 15th century, or to around 1500. The paintings have covered the entire interior in three horizontal friezes along the walls of the nave. The uppermost two friezes are filled with a rich program including scenes from the Childhood of Christ, the Passion, and images from the New Testament. The lowest frieze depicts simple textile hangings. The paintings on the walls have suffered from later whitewash and from secondary window openings and enlargements. They were uncovered and carefully restored by conservator Veikko Kiljunen in 1961. The vaults however, are filled with angels and female saints and framed in by decorative foliage and stenciled patterns on the surfaces, and with zigzag lines along the ribs. They were never covered by whitewash. Immediate parallels to the Kumlinge paintings are lacking, this goes for both style and painting program. 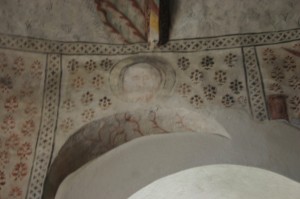 A painting representing the face of Christ, or the Sudetarium of Veronica, above an original south window, indicates a connection with the Birgittine nunnery church at Naantali, where the motive is repeatedly occurring. 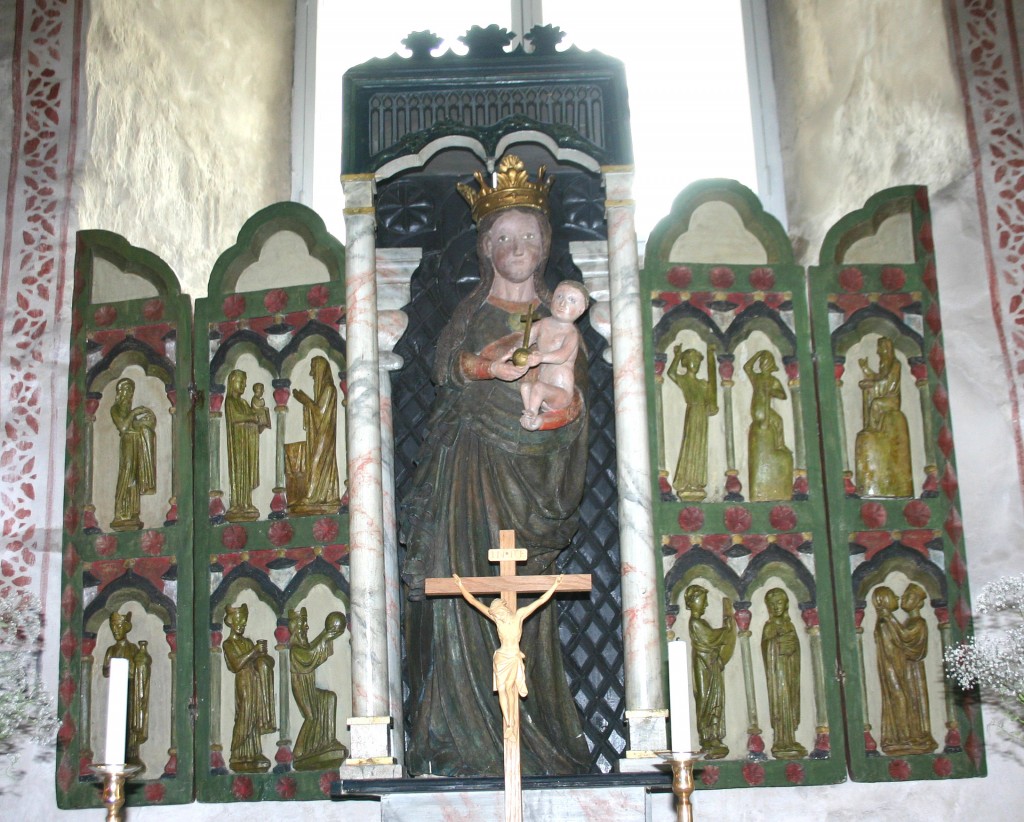 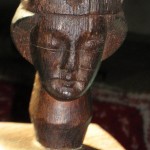 The Mary shrine from the middle of the 13th century, including the head of Christ belonging to the original Madonna enthroned in the corpus.

A Mary shrine, dated to around 1250 on stylistic grounds, is placed on the altar. It was probably imported from South Scandinavia or from Northern Germany. The corpus at the center of the shrine consists of a rectangular piece, filled with a sculpture representing Mary and Child, which during the late Middle Ages was exchanged for a more modern version of the Madonna. The side wings can be closed around the corpus, so that the trefoil shaped doors can fit into the baldachin roof of the corpus. The cut-through wings have elegantly carved reliefs of the Nativity of Jesus and his early childhood. The style is courtly, typical of early Gothic. The head of the Jesus child from the original Madonna sculpture was discovered in archaeological excavations in 1961. 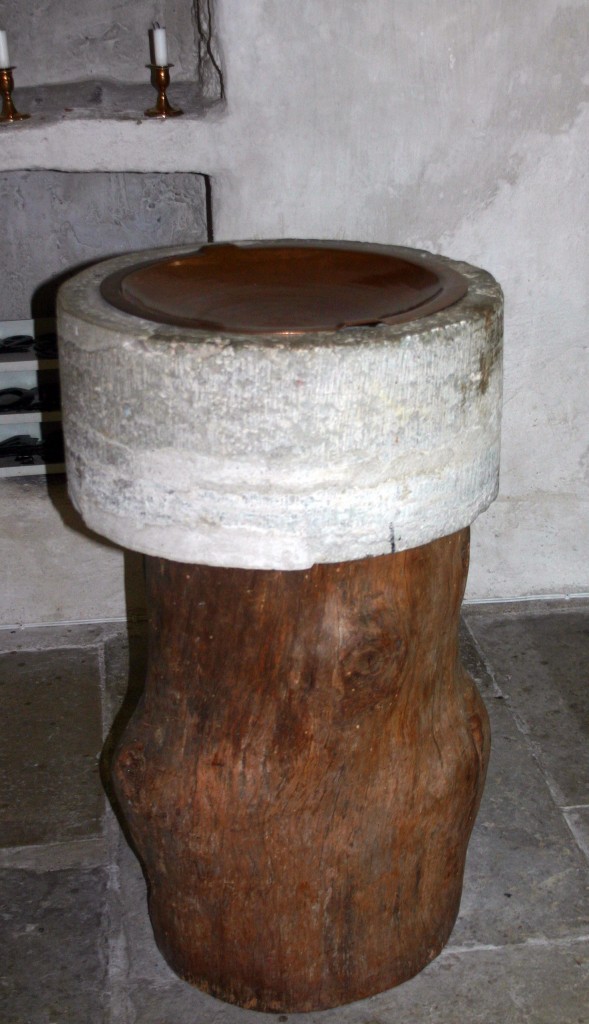 Font from the church of Kumlinge. From the middle of the 13th century. 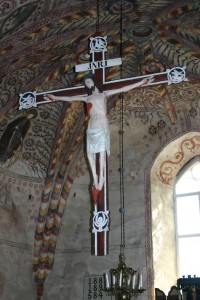 The crucifix, marking the border between the chancel and the congregation, originates from the beginning of the 15th century.

No traces were found of an earlier wooden construction on the site. Still, inventories that could belong to a predecessor to the present church have been identified. Among these the Mary shrine with the adjoining head of the Child Jesus, and the little limestone font, both on stylistic grounds dated to the 13th century (Figures 21 and 22). According to earlier archives, there was a monastery in Kumlinge. Archaeological investigations in 1961 revealed the remains of an older building in the churchyard, immediately close to the northwest corner of the church. Until this enigmatic ruin has been analyzed for dating, only speculations on its function can be presented.

Mortar analysis from the original, fire-damaged, east gable and some isolated samples from dendrochronology imply that this stone church in Kumlinge derives from the 14th century. A fire leaving traces in the eastern gable above the vaults probably occurred in the Post Reformation period. The western gable shows no sign of fire. It belongs to the early 15th century.

Joints in the walls show that the porch is a secondary addition erected against the south wall, and preliminary results from mortar analysis suggest that the porch, including the staircase to the attic, is late medieval. Thick walls in nave and porch indicate original plans for vaulting the interior. The medieval church also included a small sacristy behind the sacristy portal in the north.

During the 15th century the nave was vaulted in three bays, with ring vaults where ribs form a star pattern. The church was completely decorated with wall paintings in a unique iconographic program. Among the medieval wall paintings, two different stages can be identified: the older consists of seven preserved inauguration crosses, including a few fragments in the arch of the chancel window and around the brackets of the vault.

In the 17th century, after the Reformation, the church was redecorated according to the new Lutheran liturgy. It meant new pews, a new pulpit, and a gallery towards the west gable with images of the apostles painted on the screen.

During the Northern War the church suffered great damage, when it served as stables for the Russian soldiers, among other indignities. The paintings were sooty from open fires in the church, the inventory destroyed, and both church bells disappeared. Both silver vessels and money were embezzled during the flight to Stockholm.

In 1767 the wooden part of the clock tower was renewed. Responsible building master was Anders Hartlin-Piimänen, who also built the new sacristy in 1784. He was also responsible for the heightening of the gables and the roof, and also for covering the roof with new wooden shingles.

In the 19th century all the window openings were enlarged, and the location of the south windows was adjusted. A north window was opened in the 1870s, only to be walled in again in the renovations in 1961, when the central heating was installed. In the 1960s the wall paintings were also cleaned.