The church of Lumparland is centrally situated in the parish, on a high hill in Klemetsby. At the same time it is accessible by sea via Kapellviken bay, which opens up towards the inland sea Lumparn.

It is consecrated to both Saint Andrew and Saint Birgitta, and it belongs to Lemland mother church. An archaic wooden precinct wall, covered by a wooden saddle roof, encloses the churchyard. 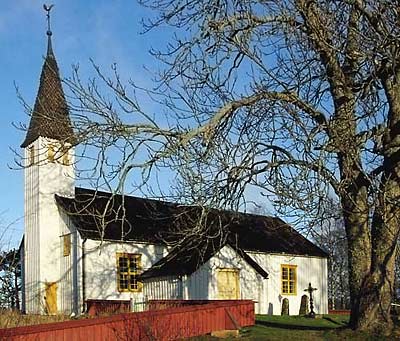 Exterior from the southwest.

The low, white-painted wooden chapel disguises the underlying horizontal timber construction by vertical boarding with laths. A tarred shingle roof covers the chapel. The eastern gable is divided into three sections, while a slightly protruding narrow belfry, 9.64m high, rises at the western gable. The tower is crowned by a steep pyramidal spire. Eight large windows, with small windowpanes, are symmetrically arranged along the northern and southern walls, and the chancel. A porch is erected against the western part of the south wall.

The chapel has a rectangular plan, with a semi-hexagonal chancel towards the east. The interior measures 18.15 x 7.2m. The south porch measures 3.6 x 4,1 m, which is roughly equivalent to the inner measurements of the sacristy, which are 4,1 x 3,4 m. The tower, only about two m wide, protrudes one m out of the western gable. 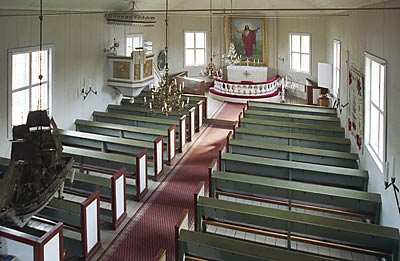 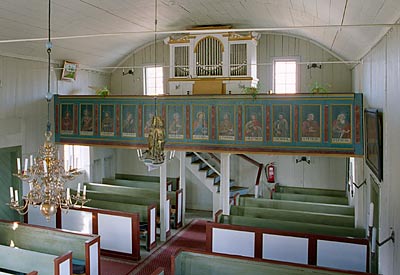 The interior of the church is light, thanks to the numerous windows (size 118 x 103 cm) and the light color scheme of inner walls and ceiling. The church has a wooden barrel vault. The interior is dominated by the big altar painting on the eastern chancel wall, signed by Victor Westerholm in 1887, with the motif ‘Come unto me’. In 1842 an older pulpit, without sculptural decoration, was replaced by another, simply paneled one. The gallery, with a screen where the panels depict Salvator Mundi surrounded by the apostles, was painted by Klas Lange (Claes Langh) in 1760. Merchant Captain Anders Andersson Edberg in Klemetsby donated an older altarpiece representing the Last Supper in 1736. The votive ship was donated to the church in 1835 by the shopkeeper Carl Gustaf Löthman.

The present chapel church has had many predecessors:

A) The chapel is first mentioned in 1544, when it lost a bell weighing about 25 kilos. In 1637 worrying reports indicate that the chapel stood on a marshy meadow, that nothing was locked, that the windows were broken and that the chapel had been seen full of goats. The complaints were considerable: The church roof had rotted; the altar was too low, the floor uneven with untidy benches. Lacking were also the altar desk, a bishop’s chair and the lectern. By 1642, barely adequate repairs had been made: windows, roof, and floor had been fixed. The roof of the chapel, measuring 9.5 x 7.9m, was covered by birch-bark and roof timber. In 1647 it was suggested that the altar should be raised in order to bring the altarpiece to the same level as the windows, the pews should be repaired, and a pulpit should be installed near the window. A porch of about 3 x 3 m was also mentioned. In 1651 the repairs of the interior were considered to be finished. The altar had finally been raised, and the chapel had received a new altar desk, a new pulpit, and a baptismal font. It was stated, “the interior was excellently and lawfully decorated”. The only thing, which remained to be done, was to construct a door for the built-in chair, a lid for the font, and a back for the bridal chair. A belfry was mentioned in 1655. In 1660 the married couple John Olofsson Berg and Kirstin Persdotter from Haddnäs donated a church bell. It was cast in Stockholm. The belfry was renovated in 1666.

B) As early as 1659 there were discussions about moving the chapel. Various options were mentioned, with the result that the chapel was moved in 1666. It was also recommended that the altarpiece should be gilded. The place chosen was a hill close to the marshy meadow, the previous place for the chapel. 8 windows were acquired to the new chapel, but there is no information about its ground plan or proportions. Only a chancel door was mentioned. This second chapel was demolished during the Northern War, when Russian soldiers burned it down. The church bell was saved from the fire.

C) Rebuilding gradually started on the foundation of the old chapel after the Uusikaupunki peace treaty in 1721. In 1728 it was time to lay the roof of the new chapel. It measured 11.3 x 7 m, with an inner height of almost three m. The porch of the chapel faced south and the sacristy north. Anders Andersson Edberg donated the altarpiece representing the Last Supper in 1736. A new bell, paid for by the parish, was cast in Stockholm in 1745. Both bells probably hung in the little belfry still decorating the western gable. A women’s gallery was added in 1781, probably along the northern wall, next to the earlier gallery, which had been painted by Claus Langh. In 1804 it was stated that the porch needed to be shingled, but that “there was no particular wish for an extension of the cramped church”. Despite this, costs and drawings were discussed already in 1806.

D) After the extension of the chapel, it got its present ground plan in 1812. A three-sided chancel to the east was added, 11 ells long and 12 ells wide. The plan was clearly inspired by Kökar Chapel. This stone church from the 1780s also influenced the chapel of Sottunga, which went through a similar extension of its chancel some twenty years later. Externally the chapel was paneled and red in color. The roof covering consisted partly of tarred shingles, partly of tarred planks. A new pulpit with an internal panel and external boarding was acquired in 1842. The votive ship was donated in 1847.

In 1886 Victor Westerholm, the artist who lived by the Lemström Canal and who had founded an Impressionist artists’ colony, the so called Önningeby Colony, offered to produce a new altar painting cheaply. The offer was gratefully received. Externally the chapel was whitewashed in 1896.