It was erected in isolation from other habitation, by the northern shore of the main island of Brändö in the eastern archipelago. The new building was adjacent to an earlier bell tower. The builder in charge and building surveyor was David Lönnroth from Uusikaupunki. 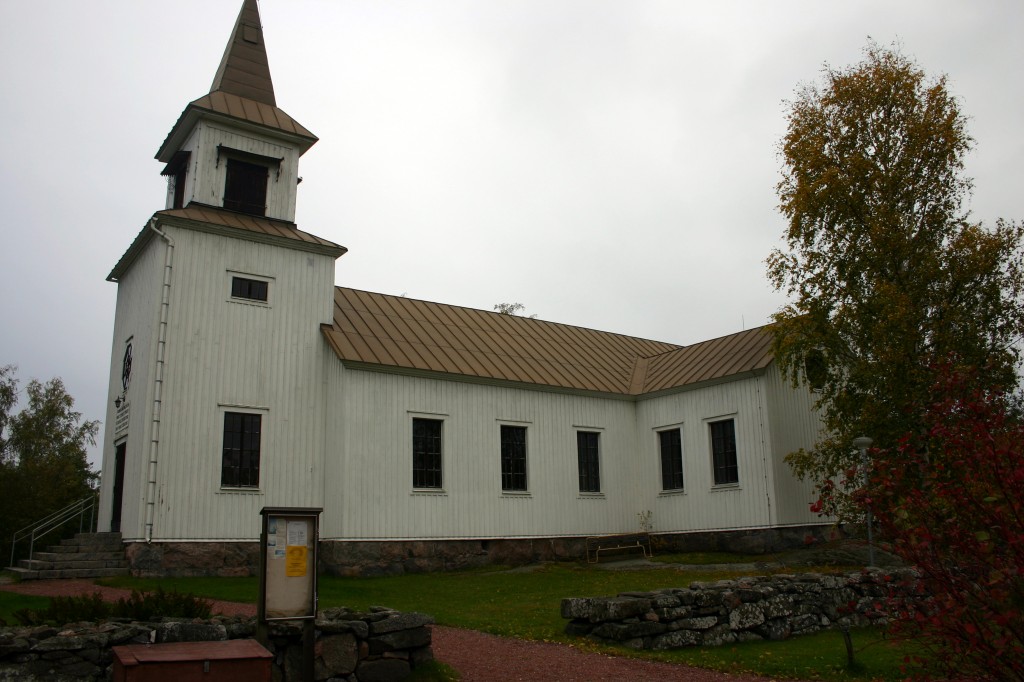 Brändö church, exterior from the southwest.

The white painted church is roofed by galvanized sheet iron. It has a cruciform plan, with subordinated cross arms closer to the chancel. The sacristy to the east and the tower to the west further accentuate the dominant east-west axis. 14 windows of equal size are evenly distributed along the façades. The main entry, the west door of the tower, is crowned by a small round window. The tower has a square plan narrowing stepwise upwards. It rises in full scale above the roof of the church where it narrows down to form a superstructure for the hanging of the bells. The sound openings face all four cardinal directions. The spire of the tower, crowned by a cross, has a steep pyramidal roof, with sloping brims flaring at the edges.

The plan of the church is shaped like a cross with a dominating longitudinal axis and subordinated transepts. The sacristy finishes the eastern cross arm and to the west a narrow bell tower is added to the main axis. 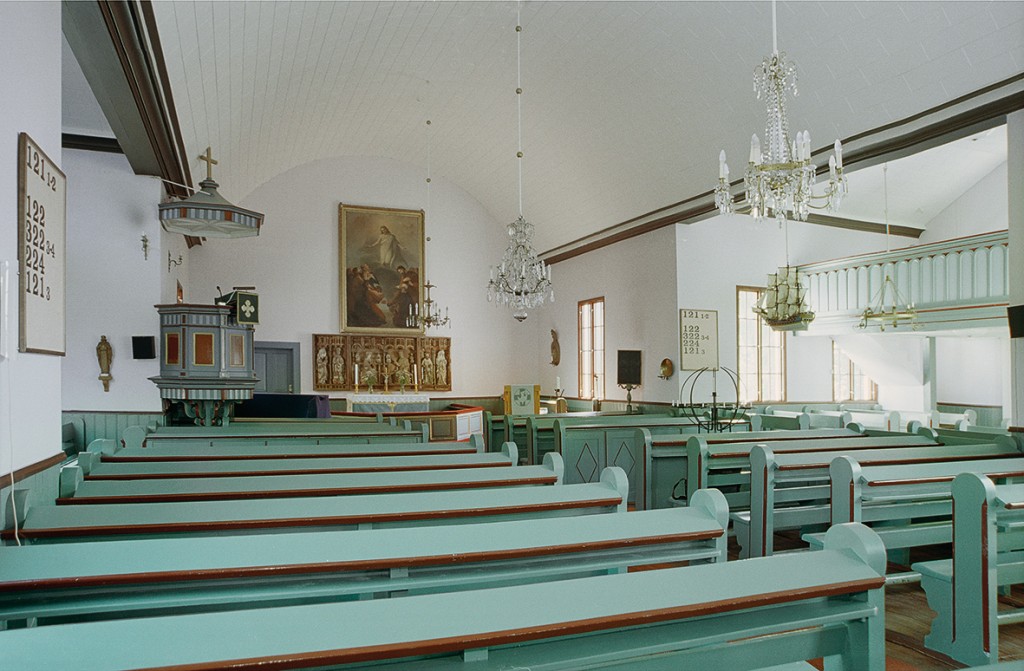 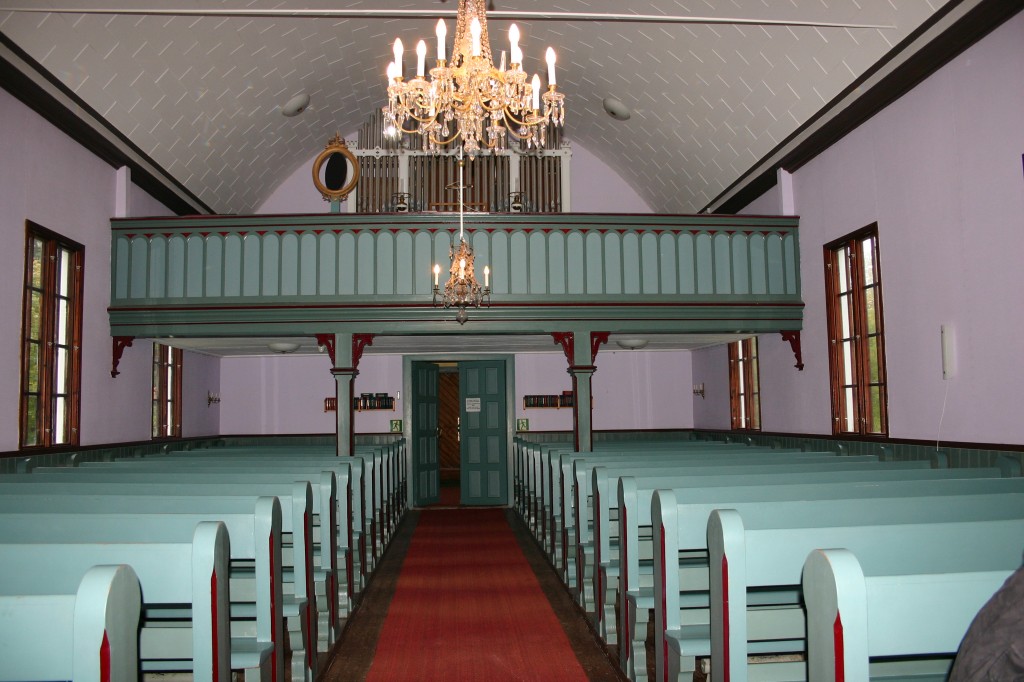 The chapel of Saint James in Brändö is first mentioned in connection with the confiscations of Gustavus Vasa in 1544, when the chapel lost a cupper bell. Yet an early inventory from 1631 mentions “two Bells, one very small. An altarpiece, somewhat old”.

The simple medieval wooden chapel was documented in a visitation in 1637:

The chapel was completely rotten and the entire interior is unskillfully built. It was decided that it should be rebuilt, that it was to be 30 ells long and 18 ells wide, as soon as the mother church had been renovated externally and internally. In the meantime improvements have to be made on roof and floors, the inner door has to be removed, the long beam across the middle of the church must be cut further down, since boys have been hiding behind it, the bell from the altar must be moved to the rear, the windows improved and bird droppings cleared from the entire church, along with all the debris that fills her.

The new wooden chapel was not erected until the end of the 1640s, further north and in a dryer place. The chapel was prefabricated in Saltvik, from selected pine timber. It measured 14,75 m x 10,67, with an inner height of only 2,4 m. Porch and sacristy were part of the plan, both measuring 3,50 x 3,50 m, and barely high enough for a tall upright man. The roof was covered with birch bark and wedged boards. A new church bell was acquired in 1685. An interesting note indicates that a new altarpiece was to be acquired. Simultaneously the congregation should “get rid of the old images, standing here and there in the women’s benches, as for idolatry,” probably referring to the medieval altarpiece. Already in 1688 there were complaints that leaking roofs were destroying the chapel.

In 1749 a new wooden church in Brändö replaced the prefabricated chapel. The building master was Mats Sipilä from Turku. Johan Sipelius did all the carpentry. This time the church had a cruciform plan, with an entrance to the west and south and a sacristy as an extension of the cross arm towards the north.  After substantial repairs in the beginning of the 19th century, the visitation records and inventories reveal an attractive entirety.

The church measured just over 20 m from east to west. The ceilings of the cross arms had wooden vaulting. Out of a total of 15 windows, two larger ones marked the chancel, at the end of the eastern cross arm. The center of the cross was crowned by a lantern, with four minor windows in each direction. The interior coloring was blue. According to the inventory from 1840 the pulpit was “Berliner blue” with black mirrors and gilded framework. It was crowned by a sky in light blue. The church had three galleries, all Berliner blue with light mirrors framed in yellow. The interior of the church was mottled (marbled) in 1840. The ceiling was painted white. New pews from 1837 were provided with numbered doors, painted in Prussian blue. Even in the sacristy the windows were Prussian blue and the inner walls mottled. The altar and the altar ring had the same blue coating. The church doors were green. The painter Hellsten came from Uusikaupunki.

Wooden paneling covered the exteriors of the walls. Everything was painted red, including the wooden roof.The church had a freestanding 7,6 m tall belfry in framed timber, also in red. The exterior of the belfry was paneled and shingled. The inventory mentions a little cast bell, fastened to the chancel wall by a little wooden tower, probably identical to the little bell mentioned already in 1631. The medieval altarpiece had survived in “two pieces of wooden tablets above each other on the altar, and another ditto on the chancel wall”. Another church bell was acquired in 1845.

Because of the marshy location a new building was planned in 1874. A drier place for the church had been selected already in the 1640s. Lack of space was another urgent issue. After an inspection the new building was moved to the stony slope by the older belfry.

An altarpiece from the middle of the 15th century, depicting the Coronation of the Virgin, is the only medieval inventory left in the church.

The altarpiece, of astoundingly high quality, was acquired from the Lübeck area in the middle of the 15th century. In the last restoration it regained its original medieval appearance. The coloring is preserved only in parts. The altarpiece is formed like a triptych, with a corpus flanked by side wings, which could be opened or closed according to liturgical needs. The corpus presents the coronation of the Virgin, where her son, likewise crowned, is humbly crowning the queen-like seated Madonna. Angels hovering on the clouds surround the figures. The side wings are dominated by saints, popular in Scandinavia. From the left they are as follows: Saint Mary Magdalene, with her ointment vessel, Henrik, the national saint of Finland, Olof, the national saint of Norway, and finally Saint Birgitta of Sweden. All figures are crowned by openwork baldachins.

The same iconography, i.e. the Coronation of the Virgin in the corpus, surrounded by Scandinavian saints in the wings, reoccurs in the Birgittine convent church of Naantali. Two bells hang in the west tower of the church, one from 1685 and the other from 1845.