Bo Ossian Lindberg’s map of the medieval churches of Åland, 1997.

Research on the Åland churches and scientific dating

The Åland churches project is fundamentally humanistic in nature, with the aim to pinpoint the chronology of the churches and to maximize information concerning them. The lack of contemporary written sources adds to the uncertainty. Even if humanistic methods, such as archaeological artifacts, coins, documentation of the building technique and style, are implemented to the extreme, on their own they cannot form the base for an objective dating. Earlier researchers have been reasoning intuitively, and the results have been dates varying by several centuries for specific churches. This could not be accepted. Since the age of the churches has not been known, the use of interdisciplinary scientific methods has had high priority within the project.

In this way the churches, together with their decorative fittings, are analyzed by different methods, in various materials. Mortar dating has been of special interest since, differently from other datable materials, there is always enough of mortar from the original building period and from all subsequent stages of construction. With the aid of dendrochronology and mortar from the different building stages it has been possible to trace the different stages of their complicated building history. Wherever organic material has been found encapsulated in the mortar, it has also been analyzed. Further, thanks to dendrochronology it has been possible to establish the origin of the timber for medieval sculptures,  and when it was felled. We have therefore been able to follow different trade routes and contacts across the Baltic Sea, and the collaboration between deliveries from abroad and local workshops. By implementing objective scientific methods systematically, we have gradually been able to build a database compensating for the lack of written sources. Interdisciplinary research and collaboration with experts in related fields, opened the way to new and reliable information about the Middle Ages in the Åland Islands.  At the moment the Åland churches appear to be among the most comprehensively and thoroughly studied medieval buildings in the area. Yet, even if we gradually get a better idea of the chronology of the Åland churches, much work remains to be done. Hopefully there will be opportunity to finish the plan with separate volumes for the churches, and to continue the comparative research.

For more information about the research team, and the international network, click News & Timeline.

Through every stage of the project we have been deeply indebted to expert colleagues. In addition to inspiring collaboration within the research team and the international networks, we have been guided by art historical connoisseurs and conservators such as Peter Tångeberg and Bo Ossian Lindberg. They have demonstrated the importance of wide experience in the field. 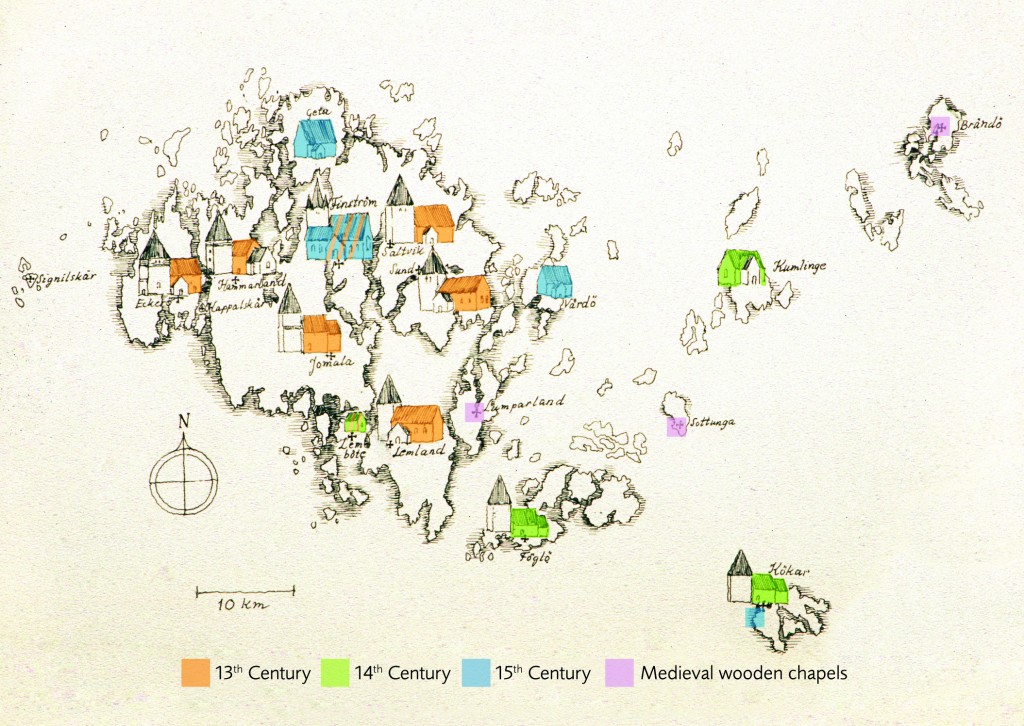 The same map as above, but this time presenting the chronology of the churches, according to results from interdisciplinary research.

For more information about the technical details of mortar dating, such as the prize of mortar analysis and, most importantly, a detailed description of the sampling process, see http://www.mortardating.com/