Eckerö parish, the westernmost part of the Åland archipelago, is separated from the main Åland island by the strait of Marsundet.

The nearest Iron Age burial ground lies just north of the churchyard. Less than a kilometre north of the church runs the old postal road, which probably functioned as a pilgrimage route westwards from Finland during the Middle Ages. Eckerö church, one of the smallest in the Islands, is consecrated to the Roman martyr Saint Lawrence (Laurentius). The unusual decoration on the east gable symbolizes a grill, the saint’s instrument of torture; he was martyred by grilling in AD 258 immediately outside Rome.

The church of Eckerö, exterior from the southwest.

Like the other Åland churches, Eckerö church is built of Åland red rapakivi granite. It lacks a visible outer socle. The nave is comparatively low and small, with an outsized west tower, built as a direct continuation of the north and south walls of the nave. The main entry to the west is in the middle axis of the tower. A high pyramidal hood crowns the relatively low tower. Both the hood and the upper part of the tower are covered by tarred shingles. The eastern façade of the nave shows archaic features, like high and pointed granite slabs put up along ground level, and the form of the walled-in remnants of the outermost roof truss in the eastern gable. The chancel window facing east is nowadays a walled-up blind window. The other exteriors have big window openings facing north and south. Vertical joints of the wall show that the tower was built later, and that it is resting on the west gable of the nave.  Also the porch towards the south, with a shallow niche in the eastern wall, is later than the nave. The eastern wall of the sacristy forms a continuation of the eastern chancel wall. 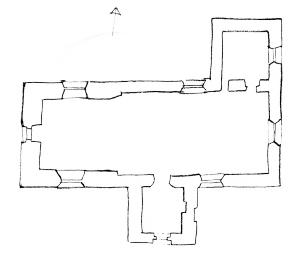 The present ground plan can give the illusion of a rectangular nave of unusually long proportions, with a sacristy in the northeast corner and a porch towards the south. However, from the thickness of the walls, approximately 1 m, we know the original dimensions of the nave. It was a rectangular hall church measuring in the interior 13.4 x 7.4m. The western gable wall is missing. The west tower, with considerably thicker walls, was erected as a continuation of the nave. 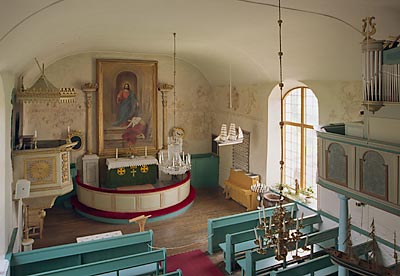 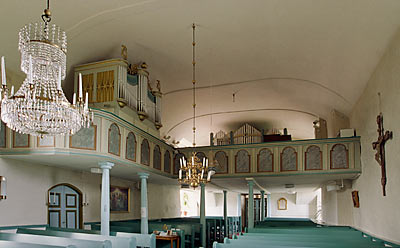 In spite of its humble size the interior of the church in Eckerö gives an impression of space and light. Light is flooding into the church through unusually high and wide window openings towards the north and the south, and in the ground floor of the tower. More space was gained by removing the west gable of the nave. In the interior thus the nave and the ground floor of the tower merge together into one single space. The preserved inner corners of the original western wall of the nave are hardly noticeable. A flat wooden barrel vault forms the ceiling. The organ gallery fills up the western church space. The pulpit that can be reached directly from the sacristy through a passage in the wall, dominates the northern wall. Placed unusually far to the east is the north sacristy portal. Its flat arch is crowned by an original inauguration cross. The present altar painting, Christ and the Sinful Woman, ordered from the artist B. Reinhold in 1876, hides a walled-in chancel window. An original priest door leading directly into the chancel is indicated by an imprint in the plaster east of the south window.Inventory 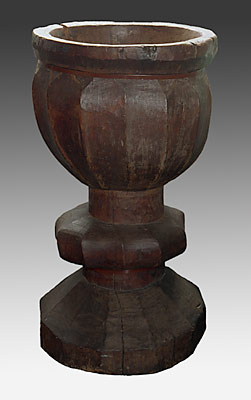 A late medieval wooden font, shaped like a cup, stands in front of the south window. The font is briskly cut from one single trunk of pine. The outer surface of the cup is polygonal, forming fourteen sections. Different layers of fragmentarily preserved wall paintings depicting figural paintings and decorative foliage cover the walls of the nave. 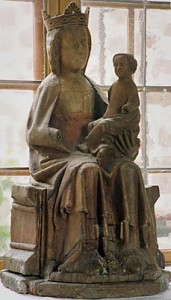 Among the medieval sculptures a Madonna from Gotland is especially noteworthy. It dates from around 1300, and it is situated on the windowsill towards the north. It was later altered to fit the spirit of late medieval times. The wooden crown is a modern addition. 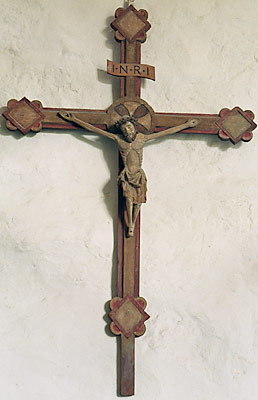 A well-cut little crucifix hanging on the north wall also belongs to the 14th century.

Bracteates from the beginning of the 13th century and a compact layer of older burials under the east gable of the nave indicate that there was an older church on the site. It was probably in wood. The Romanesque church bell, the “little bell” still in use in the west tower, can be dated on stylistc grounds to the first half of the 13th century. It probably belonged to the wooden church.

Church bell from the first half of the 13th century.

The first stone church in Eckerö, a nave with a little stone sacristy in the northeast corner, was erected at the end of the 13th century. At first the interior was dark, with a few narrow and high-placed windows and a horizontal wooden ceiling. The church had two entries from the south, the main portal further west and the priest door in to the chancel. The position of the priest door suggests that the chancel occupied about a third of the nave. An original portal in the eastern part of the northern wall is preserved. It led to a minute sacristy of 2.5 x 2.5m. A circular window is mentioned, probably situated in the west gable wall. Three individually shaped inauguration crosses in the chancel probably date from the first consecration ceremony of the stone church. No major changes in the building can be traced from the 14th century. Some time at the beginning of the century, however, the Madonna enthroned was acquired from Gotland. She probably adorned an original Mary altar by the northern wall. The little crucifix, nowadays hanging on the northern wall, also belongs to the 14th century.

In 1467 the west tower was erected, with support from the western gable and the western end of the walls of the nave. Of the same age is the winch used for the construction, still preserved in the tower. The whole tower, including the wooden hood with its complicated supporting constructions, has been preserved intact from the medieval period, and thus, together with the tower of Finström church, forms one of the oldest preserved wooden constructions in Finland. At first, when the tower lacked a western portal, it was reached from inside, from a narrow door in the western gable of the nave. A narrow window faced south on the ground floor of the tower. The early13th century church bell was hung in the tower, at a higher level than today. Sculptures of the martyrs and Samaritans Erasmus and Sebastian were acquired. But they are of different wood and different provenance, and therefore cannot be seen as a pair. The altar was also decorated with an altarpiece now missing. Later sources imply yet another wooden altar, probably one of the side-altars. 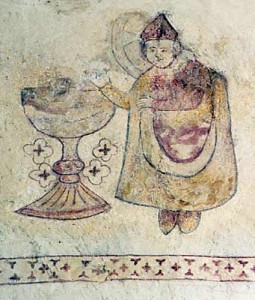 The wall paintings of the nave are from the late Middle Ages, and in several different layers upon each other. A font is depicted among the fragmentarily preserved paintings, high on the south wall. This painting can be regarded as a portrait of the cup shaped wooden font from the church, which dates from the end of the 15th century.

During the first half of the 16th century the porch was erected against the original main portal. An inner niche in the east wall of the porch indicates that the room may have served as a chapel. The outer niche of the same wall may have been the framework for a wall painting, maybe in connection with the reputation of the church as an offering church. The intention to vault the porch was never realized.

After the reformation in the 1520s some of the liturgical vessels were confiscated. According to the new Lutheran liturgy a pulpit was installed, but otherwise neglect and disrepair prevailed. The changes performed during the 17th century are generally well documented. The church was substantially repaired after the period of neglect in the 16th century. New pews were acquired. A gallery was erected along the west gable, and a new pulpit was placed close to the south wall. The choir screen was renewed and two church ships are mentioned.

In the beginning of the 18th century the nave got its present wooden barrel vault. During the Northern War (1714-1721) the church suffered great damage. The medieval reredos was destroyed, and massive repairs were required in the interior. Two different artists are mentioned, Jonas Bergman, who repaired the altar painting, and Gustaf Pilou who painted the gallery screen.

The 19th century was a time for substantial changes. The windows were then enlarged gradually to their present proportions. A new altar painting of the Last Supper was acquired. In 1837 the small sacristy was torn down, only to be replaced by the present more spacious one. At the same time the west gable of the nave was removed and the church room was enlarged considerably. Space was assigned for a new gallery further towards the tower. In 1908 the chancel window was walled in. In connection with a larger renovation in 1952 Eckerö church was archaeologically excavated.