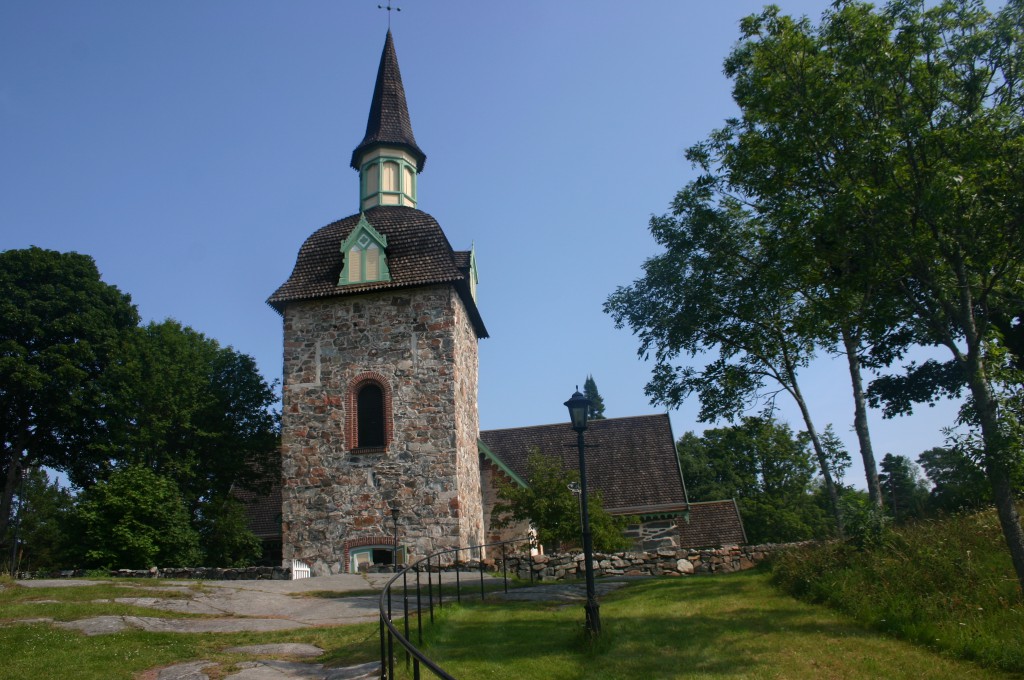 Föglö church, exterior from the west.

Föglö church, probably consecrated to Mary Magdalene, is located by the water at Kyrksundet. “Fyghelde” is mentioned as one of the harbors between Linaboete (Lemböte) and Thiyckekarl (Kökar) in the so-called Danish Itinerary, written in the middle of the 13th century.

Today the chapels of Sottunga and Kökar belong to Föglö mother church. But this has not always been the case: during the Middle Ages Sottunga was the only chapel under Föglö.  The spacious churchyard with well preserved gates is surrounded by an impressive stone wall, where the marks of the farms providing the stones still can be seen. The church is not yet fully investigated, but the present state of research is described here. The present church is the result of a radical rebuilding in 1859-61, according to drawings signed in 1857 by the well-known Turku architect Georg Theodor Policron Chiewitz.

The exterior of the church differs from other Åland mother churches. Instead of selected stones of red granite, rapakivi, we see great gray granite blocks with big drilling holes from the quarrying, a technique unknown in the Middle Ages. A narrow west tower in red granite, with large windows framed by bricks, is connected to a church shaped like a cross with equal arms. The style is Neo-Gothic, with windows and portals framed by bricks. In the western cross arm, closest to the tower, the remains of an earlier church in red granite can be seen. Even traces of a demolished porch can be seen in the south. All cross arms are penetrated by large double windows with decorative diagonal mullions at the top. The southern entrance is built into a brick extension in front of the south cross arm, while a polygonal* extension to the east forms the sacristy. A decorative fret-sawed cornice runs around all cross arms. The entrances at the south cross arm and the west portal of the tower serve as the main entries to the church. A narrow door leads directly to the sacristy from the south. 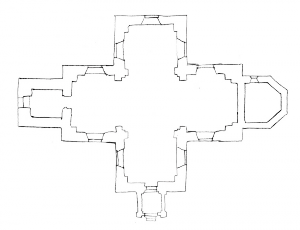 The cruciform ground plan includes the chancel in the eastern cross arm. A narrower and lower sacristy –an extension of the chancel– has a tripartite finish towards the east. A tower in the west connects to the west cross arm of the church. The church has two entries: the central main portal in the west wall of the tower, and an entrance from the church yard in an extension in the south cross arm. 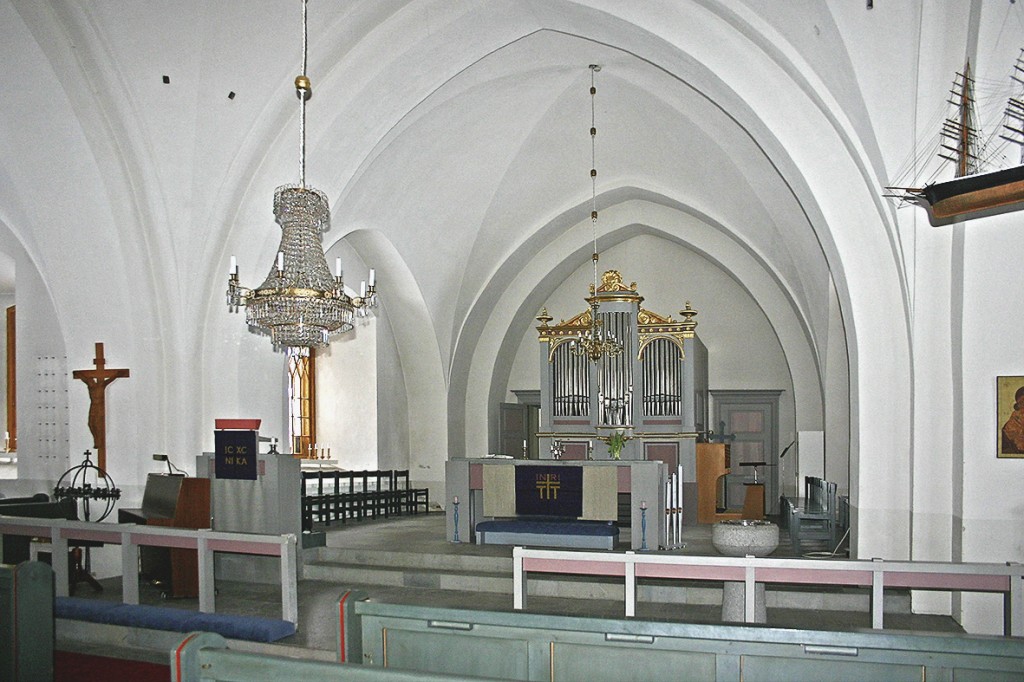 The light and undecorated interior gives a cool and plain impression. There is a high white cross-vault in the centre of the cross while the high altar in the east projects far towards the centre of the cross. The chancel in the eastern transept is on a higher level a few steps up. The coloring is modest with whitewashed walls and vaults and has a floor of sandstone from Öland. There is nothing in the architecture reminiscent of the medieval church. On the contrary, the fixtures are radically modern, with altar, reading pulpit, and altar round in an ascetic design from1968. The pews, which were also renewed then, are painted in a dark bluish green. The architect in charge was Erik Kråkström. The altar is ornamented by a medieval reliquary cross in silver, probably from around 1400. It is framed in a protecting case of plexiglass.

The seal from Föglö church, presenting the church exterior as it was before 1850. 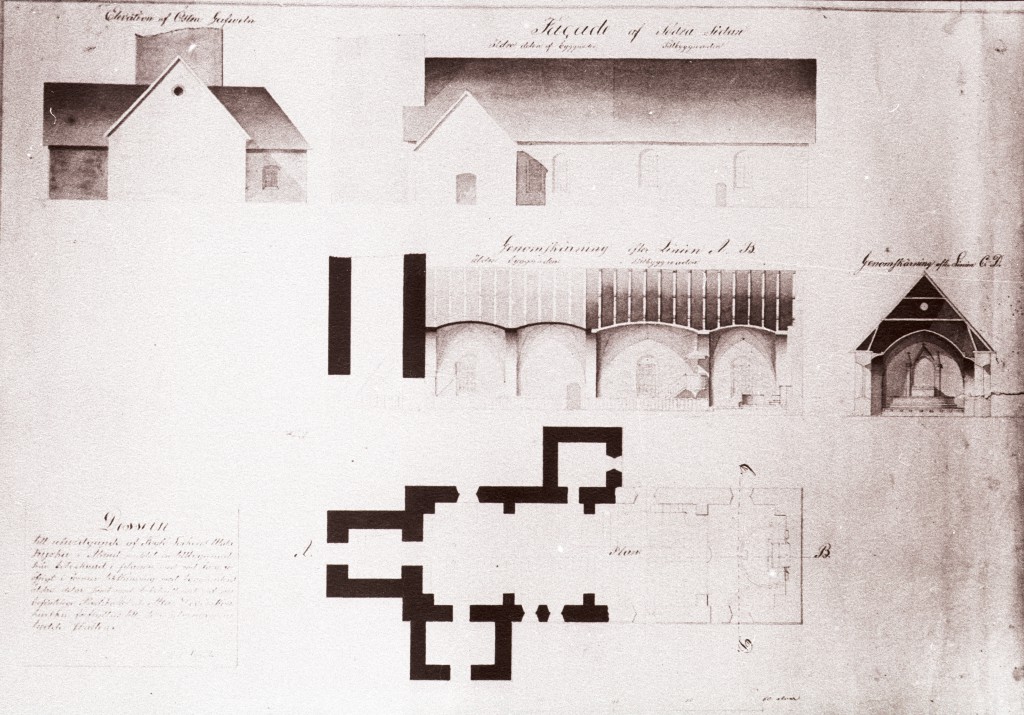 The design of the old church is well known. It is partly shown on the old seal of the church where the southern façade is seen  partly by unrealized plans for alteration made by P.J. Gylich in the 1840s. Additional documentation was received from archaeological excavations in 1966 and 1967.

Föglö church originally had a single nave with a narrower chancel in the east without an apse. A little sacristy had been built against the eastern side of the northern long wall, while an unusually big porch was connected with the western part of the southern wall. A high double window let in the light from the south and there were no windows to the north. The nave was the oldest part, while sacristy, porch and west tower were added later. The narrow chancel is enigmatic: coins from the 14th century suggest that it belongs to the same period as the nave. Yet, in the excavation report the chancel deviated from the main axis and lay diagonally towards the northeast in an unnatural way. Matts Dreijer’s explanation that a rock to the north was in the way seems highly unusual. Neither visitation reports nor building surveys from the 1600s until the rebuilding mention that the chancel was in any way different, while problems with the sacristy walls were scrutinized. A more likely explanation could be that the walls of the chancel were moved in the process of rebuilding.

This older church shows characteristic Åland traits: it was built in rapakivi with windows and door openings framed by limestone, and a priest door led directly into the narrow chancel. The nave was divided into two cross vaults of brick. The secondary vaults rested on heavy columns along the walls.

According to an inventory from 1838, the church measured 53 ells (more than 31m) in length, and 15 ¾ ells (9,3m) in width. The height to the ceiling was 9 ells (5.3m). The floor in the nave and chancel was laid in Gotland sandstone. Three of the six windows belonged to the nave, i.e. the two coupled windows to the south lengthened downwards in 1839) and one in the northern wall. Two window openings belonged to the chancel, while one window to the south lit the ground floor of the tower. Two galleries filled the western part of the nave, the gallery for the men against the western gable, and the other for the women towards the north.

The sacristy measured 7 x 6 ¾ ells (roughly 4.1m x 4m), with an inner height of 4 ¼ ells (2.5 m). It had a wooden floor and a window towards the east, and no system for heating. The only passage to the attic of the nave was an opening from the sacristy. The exterior was whitewashed, the shingle roof recently tarred and well maintained. After a burglary in the sacristy in 1838 the parish council started discussing different options: the church was either to be enlarged or replaced by an entirely new building. The congregation was totally against the building plans, activated by the vicar Matthias Forsberg. When plans for an enlargement were initiated in 1841, the church was in good condition. Still, for bigger celebrations it was considered “less spacious”.

The east wall of the chancel was covered by an altar painting from 1759 by Jonas Bergman. The motifs were the Last Supper and the Suffering of Christ in Gethsemane. Walls, vaults, windowsills, doors, galleries and pews were painted, but not the window frames.

In 1847 the county architect in Turku, Pehr Johan Gylich, delivered his drawings mentioned above, with a plan to prolong the church further east. Czar Nicholas I granted a respite of 12 years for the new building, and at that stage drawings by Chiewitz were already at hand. The result was a drastic rebuilding, where most of the medieval nave, including chancel, sacristy and porch, were demolished to give way for a new, and for Åland completely new church architecture, in 1861.

During the Northern War (1714-21) the church was “wretchedly devastated and totally burnt” by the enemy. Substantial repairs awaited walls, vaults, roof, windows, and doors. Also the upper part of the church tower was rebuilt and the bells were re-hung.

A century later, in 1966-1967, the church was archaeologically excavated. The results were exceptionally rich. In addition to the spectacular reliquary cross and the medieval altar foundation, 53 medieval coins were found, 17 of which date from the 14th century. The oldest coins were spread all over the chancel and the nave, many of them immediately close to the medieval altar. Remains of heavily burnt stained glass were also excavated. Among the debris from the destruction of the old church was plenty of plaster from the vaults. Fragments of red plaster show that the church had had painted walls. After the excavation the church underwent basic repairs under direction of architect Erik Kråkström. In the process the medieval altar along with the foundation walls were covered with concrete, which complicates further investigations. In 1968 the church was re-inaugurated. 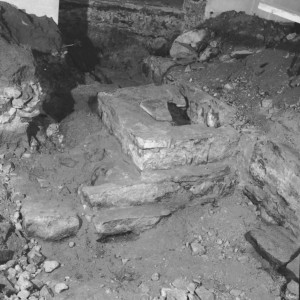 Remains of the medieval altar were uncovered in the chancel. It was erected immediately against the east wall. In connection with the enlargement in the 1860s the altar was leveled down to a height of 75cm above untouched earth. Dreijer estimated the original altar slab to be ca 150 cm x 110 cm. The height of the altar, including the slab, was estimated to be 76 cm above floor level. In the excavations a carefully mortared niche was discovered deep inside the altar, against the east wall. Bricks in three layers lined the cavity (18 x 18cm, 20cm deep), which was covered by two flat sandstone slabs. The niche was for hiding relics. 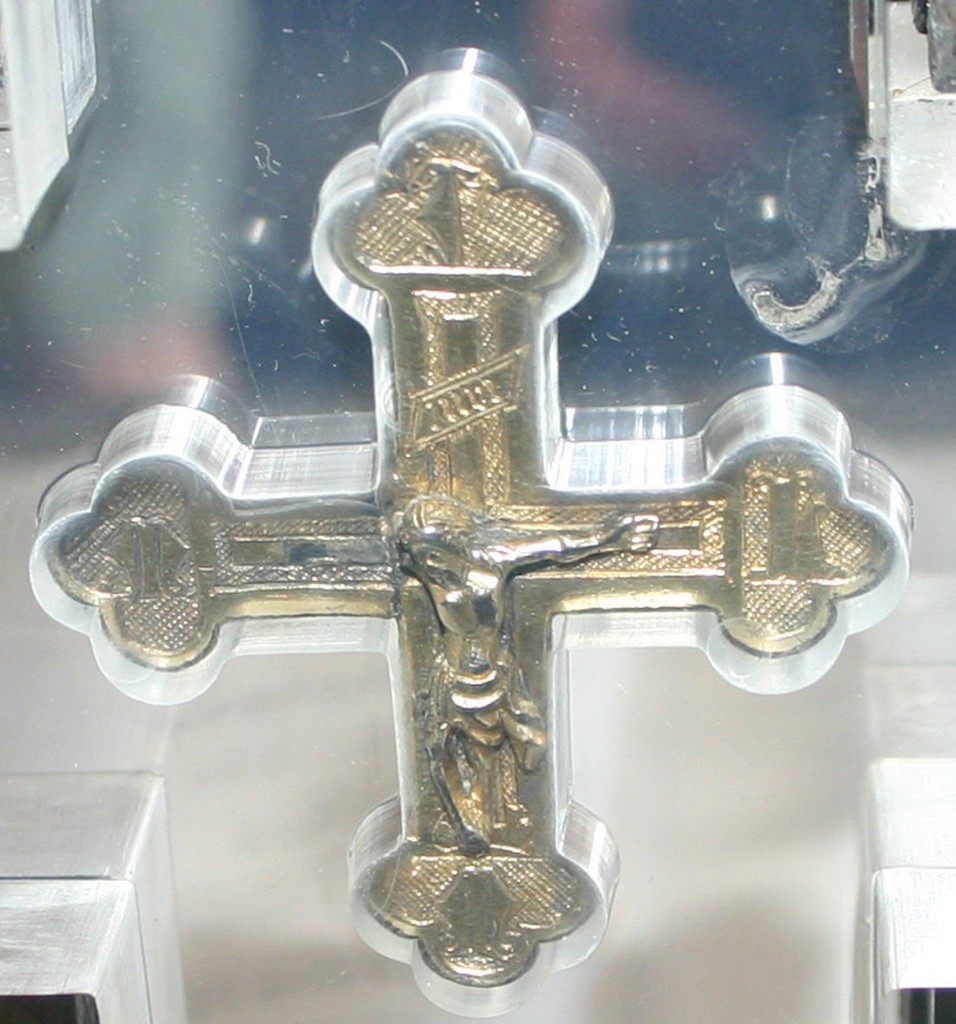 An exquisite silver reliquary cross was found during archaeological excavations in a crack under the hide. Originally it had been laid down in a little wooden box with pieces of metal work. It still contained two little pieces of the relics, and a piece of parchment with the inscription: Mary Magdalene. On stylistic grounds the cross can be dated to the beginning of the 15th century or around 1400.

The little bell from the 15th century, with master marks from Stockholm preserved, still hangs in the tower.

An older altarpiece from 1795 depicting the Last Supper, by master painter Jonas Bergman, hangs on the cross-wall, above the southern portal.

The altarpiece, depicting the Last Supper, by the Court Painter R.W. Ekman in 1861, has been placed on the western cross-wall after the most recent renovation.

The organ, placed in the very front of the church, behind the high altar, was built by Kangasala Organ Factory in1970. The older organ façade from 1864, however, encases the new organ.

A modern wooden crucifix, carved by the artist Dick Häggblom, hangs in the north eastern corner close to the reading desk. It was donated to the church in 1986.