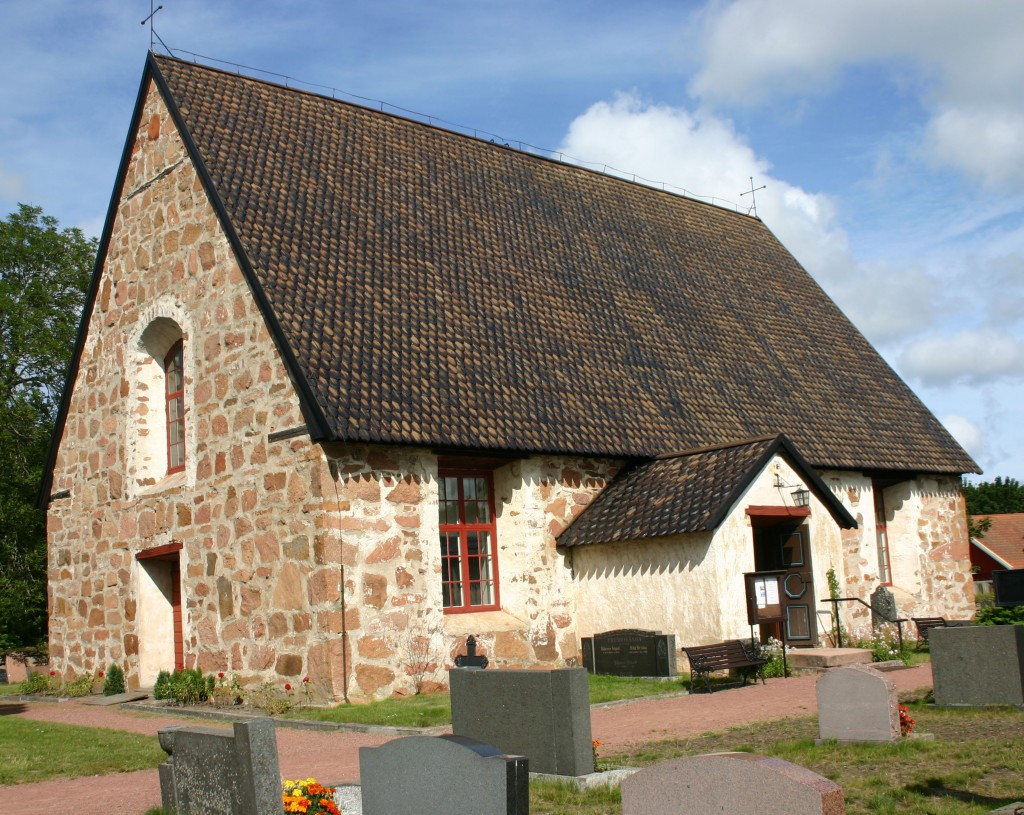 Geta church. Exterior from the southwest.

Geta Church is a single-naved hall church built of Åland red granite. The tarred, steep saddle roof  is covered with shingles. There are windows on all walls. A large chancel window breaks through the eastern wall. On the western gable, the window is higher up, above the entrance. Towards the south there are three big windows, reaching up to the roof, while one window opening faces the north. A porch of brick has been built against the western part of the south wall. The low and spacious sacristy is on the eastern side of the north wall. It was not built in connection with the nave. Instead of a west tower, a detached bell-tower stands beside the church wall, south west of the church. The grave chapel south of the church was built in the 1820s for the Brummer family from Bolstaholm. 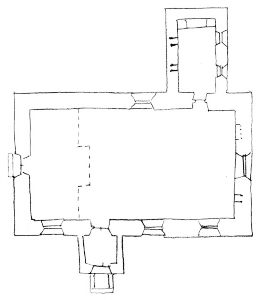 The church has a rectangular plan, with inner measures about 17 x 9 m. There are two different entrances to the church, one in the middle of the west gable, and one through the porch in the south. A third door in the northern wall opens up towards the sacristy, with an inner measure of about 6.2 x 3.1 m. Two windows of the sacristy face east. 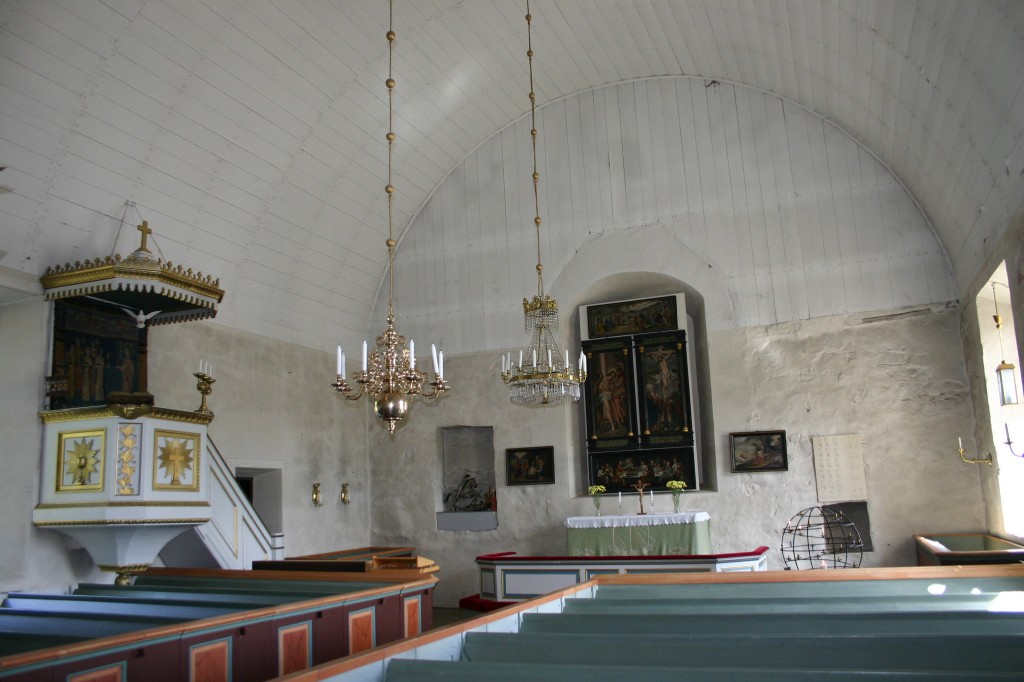 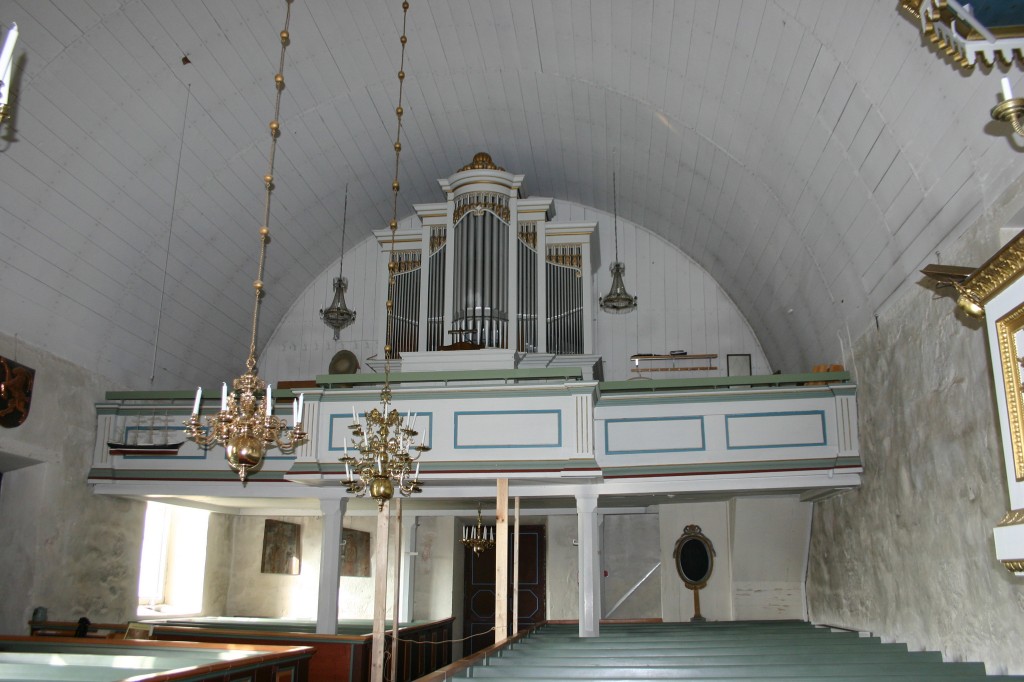 Many big windows together with a high wooden barrel vault give an impression of light and space. The chancel wall is dominated by an altar decoration in four parts that almost covers the chancel window. A low painting representing the Last Supper on the altar is crowned by two high and narrow paintings depicting the Adoration of the Shepherds and the Flagellation of Christ. On top there is a long and narrow composition representing the Ascension.  In 1685 the Snäckö gentry, Jacob Rusch and his wife Brita Rothof, donated the altarpieces. Close to the sacristy portal is the pulpit from 1842 made by Isak Boman, carpenter from Geta. It represents high-class Empire style with much gilding and a striking blue sky covered with stars.

Coats of arms on the northern wall.

Two coats of arms on the chancel wall representing the family Gyllenflög from Bolstaholm date from 1671 and 1699 respectively. The sacristy also has a wooden barrel vault. The portrait of Captain Nils Åman (1684 – 1758) of Bolstaholm and Möckelgräs is kept here.

Together with Finström Church, Geta Chapel was granted indulgence in 1463, and in 1487 Bertil, the Chaplain of Geta, received a donation from Kort Hartviksson from Kodbolstad (today Bolstaholm). These historical sources can be supplemented with scientific analysis. According to dendrochronology, there were a couple of extensive alterations of the roof construction, one at the end of the 16th century and the other in the 1820s. Only one of the wall plates could dendrochronologically be dated to the time after 1450. The medieval origin of the wall plate has later been confirmed convincingly through scientific methods, among them mortar analysis.

The medieval interior of the chapel has also been described by Boetius Murenius in the 17th century. He talks about the neglected interior, with “three repulsive stone altars and other debris” which had to be removed, likewise “papist banners around the altar and the sanctus bell of the chancel”. Against the south wall the chapel had a little porch of wood, towards the north a stone sacristy of unknown size. The altar had a wooden altarpiece, which together with a crucifix, and an equestrian group of Saint George and the dragon had survived from the Middle Ages. The paneled ceiling was horizontal; the windows were fewer in number, and only half the size. The bells were provisionally hanging in a simple construction of loosely joined beams in the churchyard.

The altar arrangement in six parts: 1) the Ascension, Christ surrounded by 18 people and Mary. 2) the Last Supper, 3) the Adoration of the Shepherds, 4) the Flagellation of Christ, 5) Christ in Gethsemane, 6) the Crucifixion, donated in 1685 by Jacob Rusch and his wife Brita Rothof from Snäckö.

In the 17th century a number of alterations were made. Three new windows were cut through the wall, which meant that all south windows were enlarged. Another window was opened in “the rear of the church”. The roof was renewed. The church received a “new interior” consisting of new pews, a lectern, a bishop’s chair, a pulpit and a baptismal font. The medieval altarpiece was cleaned up, as were Saint George and the dragon. The inner walls were whitewashed and the crucifix was hung on the wall. No medieval wall paintings were documented under the plaster. Instead there were fragments of paintings from the Post-Reformation period. Large donations were received from the aristocracy in Bolstaholm, Möckelgräs and Snäckö. The arrangement for hanging the bells was renewed in 1685.

In 1704 a new ceiling was discussed, a wooden barrel vaulting, with reference to what had recently been done to Eckerö Church. No barrel vaulting took place at this stage. Soon afterwards costs for the enlargement of the sacristy were included and a substantial amount of material had been used. The textiles of the church were badly damaged during the Northern War. In a note from 1777 it is said that the chancel railing should be removed, because it prevented the congregation from seeing both the altar and the board of numbers. Around that time Jonathan Lindström painted the interior, i.e. the gallery and the altar desk.  A new bell was donated to the chapel by Captain Nils Åman in 1749.

As everywhere, the 19th century also meant more extensive changes in Geta. The general ideal, also among the Åland churches, was that the interiors of the churches should be bathed in light; they should give the impression of airiness and hygiene. Internally, the walls were whitewashed. The ceiling got its high barrel vault in 1828, at the same time as the windows were enlarged so that they reached their present size. The windows in the gable walls were also renewed and enlarged. A new brick building substituted the little wooden porch. Externally the joints were given new plaster. The bell tower was rebuilt and repaired in many stages and the lower part of the belfry was used to store material. The precinct wall in stone was built in the 1850s.

In the 1930s minor renovation programs were initiated in the church. The conservator Oskari Niemi documented existing wall paintings. At the same time a new bell tower was discussed. The porch also underwent renovations. In 1965-66 the church was restored on a larger scale under direction of the architect K.R. Lindgren. Lindgren designed new pews for the church, while the conservator Veikko Kiljunen uncovered what was left of the Post-Reformation wall paintings.