Hammarland Church, consecrated to Saint Catherine of Alexandria, is one of the mother churches of Åland, with Eckerö as an subservient chapel.

The church was built close to a little lake to the north, with an outlet into a bay and further out into the sea. The church lies along the old postal road, which is probably identical to the medieval pilgrims’ road from Finland further out in the world. The largest graveyard in the parish, “Kjusarn”, lies immediately west of the church, surrounded by well-preserved and picturesque church stables. 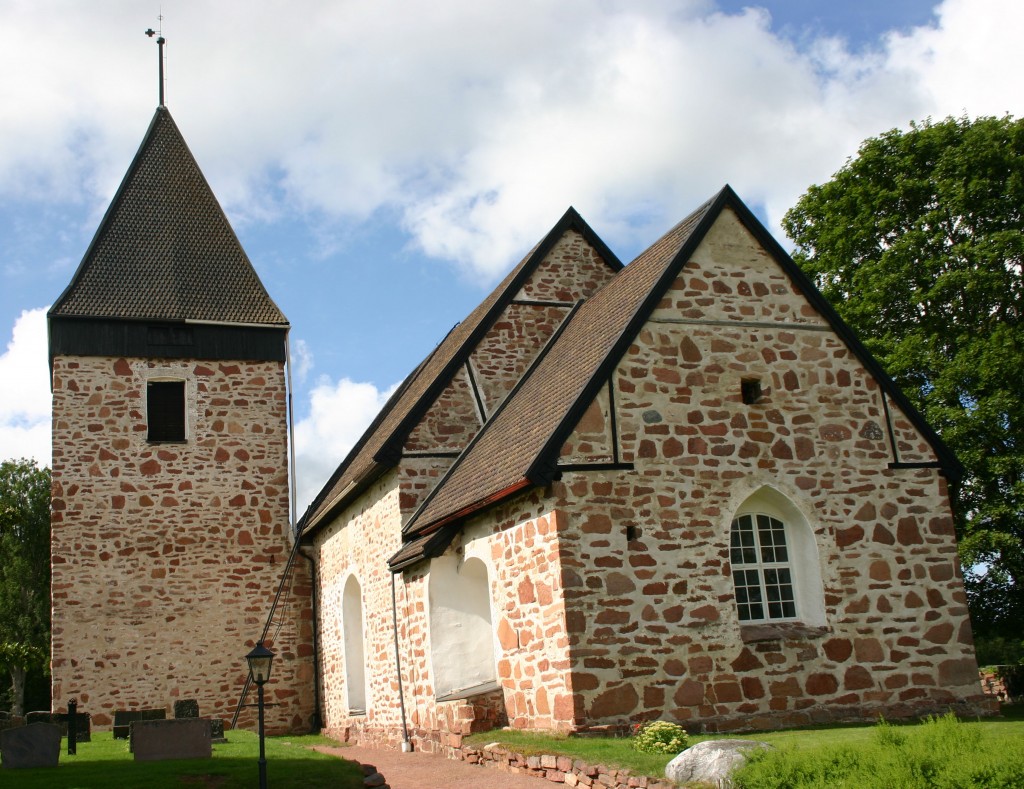 Exterior from the southeast.

The church has a skyline in three steps, the highest point being a pyramidal tower built against the western part of the southern wall of the nave. The nave is second highest, and the lowest part is the narrowing chancel building to the east, built against the eastern wall of the nave, the original chancel wall. The exterior of the church thus shows many different stages of building: secondary units directly connected with the nave can be discerned. The building material is the local Åland red granite, rapakivi. In the nave the stones are small and the façades are framed by larger granite slabs in the corners. Except for a short part along the southern wall, a simple stepped socle runs along the whole nave. The windows are consistently large, and roughly hewn through the walls. The south façade of the nave shows traces of many alterations. Obvious joints show that both tower and sacristy are secondary additions. The location of the tower, against the south wall of the nave and in direct line with the west gable, is most unusual. Also, the sacristy against the northern wall lies unusually far to the west. The joints between chancel and nave are not that obvious. Without a visible joint, the nave continues further east into a high and narrow wall. The wall is roughly executed and ends abruptly in the east. The entrances are one portal in the southern wall of the tower and another in the western gable of the nave. 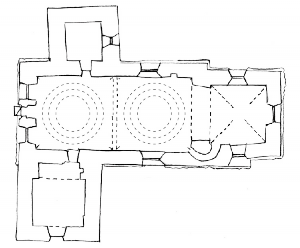 The ground plan shows a rectangular hall church (inner measures 16.6 m x 8.3 m) divided into two squarely vaulted bays connected by a transversal arch. Against the nave a tower, a narrower eastern chancel, without an apse, and a sacristy have been erected. The placing of the tower to the south is rare. It has been placed against the original main portal in the southern wall of the nave. The sacristy portal, roughly opposite the south portal, is placed unusually far west for Åland. Thus the sacristy, too, lies unusually far to the west. Yet another portal is found in the middle of the western gable. To the south, in the joint between the nave and the chancel, there is a mysterious construction, or “a block in the wall” of unknown original function. Today it houses the stairs to the pulpit. Another narrow staircase in the south wall reaches up to the attic of the chancel. 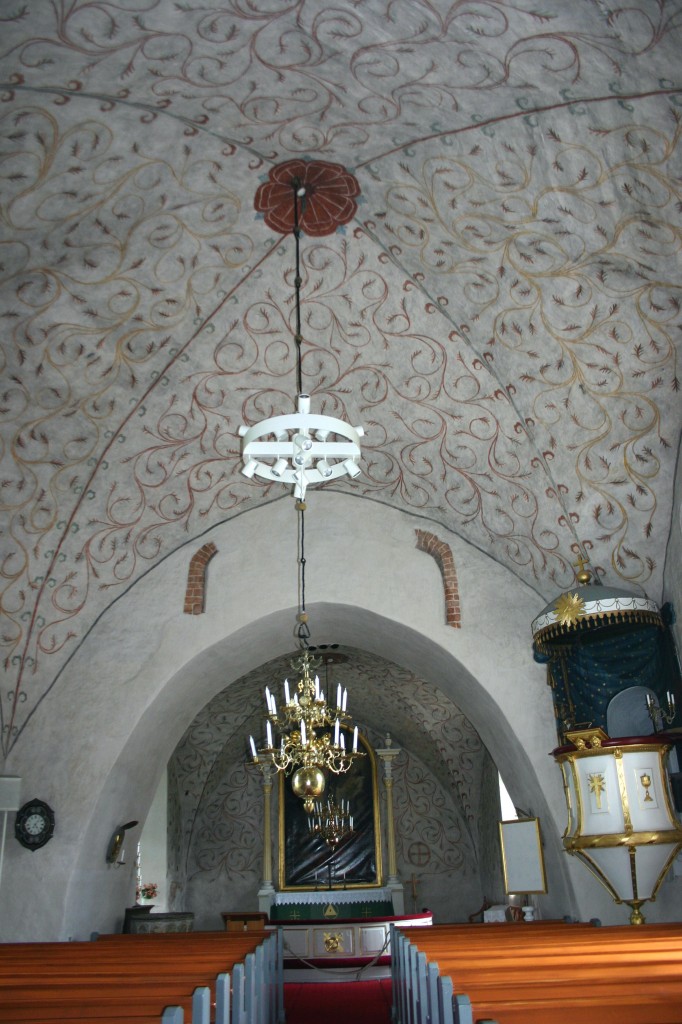 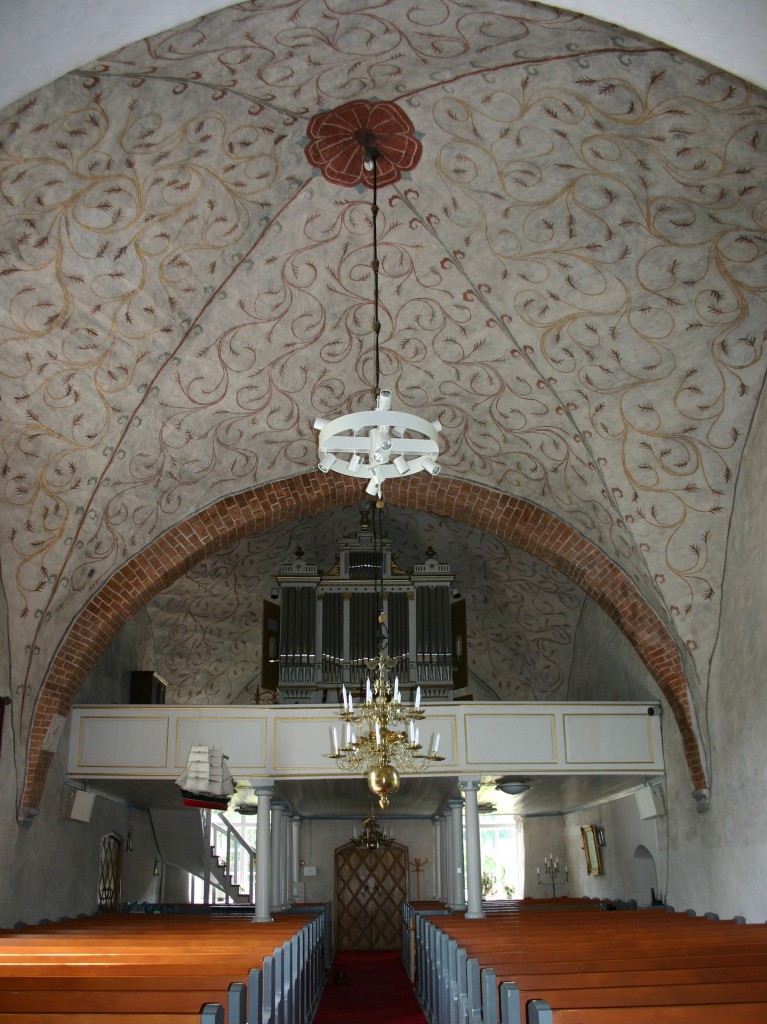 The interior of the church is harmonious and proportional. Here we can see all the different building stages, also visible in the exterior: a single rectangular nave, with secondarily added tower, chancel, and sacristy. The nave is obviously the oldest part. It is divided into two bays, with a transversal arch in between. The bays of the nave are covered by elegantly cast cupola vaults of concentrically arranged fieldstones. The vaults start low down along the walls, reaching considerable height at the top. A painting giving an illusion of a brick wall has covered the transversal arch between the vaults, which is also made of fieldstone. The arch rests on simple profiled brackets in limestone. The vaults are completely covered by medieval multifoliate ornamentation in green and red. The brick imitation recurs in the framings of two walled-in windows situated high up to the east. Under them the nave opens up towards the chancel through a low triumphal arch. The chancel vault differs from the vaulting of the nave in that fieldstones have been arranged as a cross vault with clear groins and angled corners. The ornamentation in the chancel covers the entire vault as well as the walls. 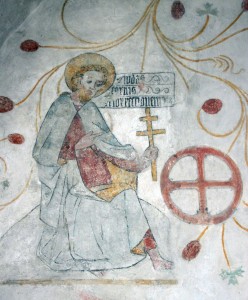 West of the northern window, immediately close to an inauguration cross, is the only figural painting in the church: Saint Judas of Thaddeus, seated with a double cross and an associated text band. He is the only one of the twelve apostles preserved from a Credo-suite. Wide and high windows to the south and north are complemented by three window openings in the western gable. Two of them flank the west portal, and the third, asymmetrical in shape, is placed higher up in the central axis of the church.

In Hammarland no traces of an earlier wooden church have been identified. The first stone church was erected in the second half of the 13th century. The vaulting was finished somewhat later. Once more, it was originally a hall church with the chancel area included in the eastern part of the rectangular plan. A priest door, nowadays walled in, led directly into the chancel from the south. The brick imitation on the transversal arch and the double windows in the east wall of the chancel belong to this first building stage. The exterior of the same windows can be seen from the attic of the chancel as well as two round-arched and highly placed windows with limestone framing in deep window niches. To the west, the church had only one opening high up, formed like a quatrefoil of Åland limestone. The other window openings were high up in the southern wall. There were no windows facing north.

The tower was erected in the beginning of the 14th century. The reason for choosing to build the tower against the original main entrance may have been bad foundation conditions in front of the west gable. Another reason might have been a wish to avoid blocking a wall grave in the western wall of the church, indicated by later sources.

The ground floor of the tower had a double function. It was both porch and chapel with a large stone altar consecrated to Saint Olof. The nave was enlarged in the beginning of the 15th century with a new chancel, narrower than the nave, and with a straight east wall. During this building period, however, a devastating fire occurred in the attic of the nave. Flaking field stones above the vault bear witness of the disaster. Indirectly the fire can be dated through dendrochronological analysis of the new roof trusses, which in the 1440s replaced those that had burnt. Because of the fire the roof of the chancel was not finished until the 1460s. The sacristy belongs to the late Middle Ages.

The altarpiece was destroyed and the sculptures spread in various directions, but it can still be reconstructed with considerable certainty: a long altarpiece ornamented the new altar in the chancel. A scene representing the Father of Mercy, where the enthroned Father holds the deposited Christ in his arms, dominates the center part. The scene is flanked by Mary and Anna, the apostle Peter and John the Evangelist. The left wing was filled with Saint Birgitta, Saint Henrik and Saint Barbara. In the right wing follow Saint Catherine of Alexandria, Saint Lawrence, and Saint Erik. The church ordered the altarpiece from northern Germany, around 1440.

Immediately after the Reformation the church was neglected.  Hair-raising stories have survived of how the porch functioning as a charnal house, containing several hundred skulls. The hood of the church was renewed in the 17th century, but the medieval pyramidal form was preserved. The portal through the western gable was hewn up in the beginning of the 18th century. No essential architectural alterations were, however, made until the first half of the 19th century, when existing windows were enlarged and new windows were made to the north and in the western gable. The triumphal arch to the chancel was enlarged

Archaeological excavations directed by the architect Alarik Tavaststjerna were initiated by 1913. In connection with the excavation the church was renovated and medieval wall paintings were uncovered. Another large restoration and cleaning took place in 1960, when the old iron heaters were replaced by a new hot air system, which a few years later gave way to central heating. In the autumn of 1987, the interior once more faced a well needed cleaning. 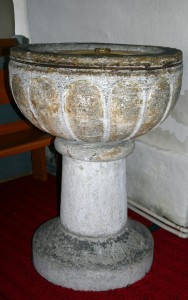 A so-called ‘paradise font’ of Gotland type, but of local Åland limestone, dates from the latter half of the 13th century.

The bishop’s chair, fragmentarily preserved, against the northern chancel wall, was acquired in 1650. The painting in the front mirror represents the priest Aron, brother of Moses, and an Old Testament predecessor of the bishopry.

The crucifix from Hammarland church was sold in 1888 to the Turku Historical Museum. It now hangs in the Nun’s chapel in Turku Castle. Originally it filled the triumphal arch in the church, standing on a transversal beam. Stylistically the crucifix can be dated to the beginning of the 15th century.