The church of Kökar, exterior from the southwest.

The church is built of stone and has relatively low walls under a high roof covered with red shingles. The western gable is high, partly covered with shingles, while the chancel in the east is semi hexagonal. The church has two identical entrances, in the western gable and in the middle of the southern long wall. In the northern long wall there is a stone sacristy. The wooden campanile lies on the western side of the churchyard, and has the additional function of a landmark for seafarers, with electric lighting of the channel installed on the wall. 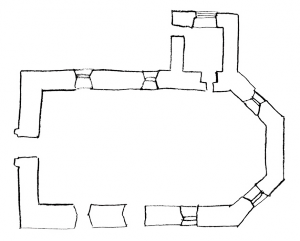 The ground plan forms a rectangular, fairly wide nave, with its characteristic semi hexagonal chancel in the east. Externally it is about 23.5m long and about 14m wide. There is neither porch nor hall in the church. The sacristy on the north side measures 7 x 5.5m externally and has two windows to the north.

The single nave interior is light thanks to six windows of equal size: two in the chancel, two on the south side and two on the north. The impression is further strengthened by the whiteness of both walls and the inner wooden barrel vault, with a few details in ultramarine blue. The pulpit is situated against the northern wall, while the chancel has a bench for the parish organist and a bishop’s bench on either side of the altar circle. The altarpiece depicts the Last Supper. It was painted by G.G. Sveidel in Turku and acquired in 1803. There is an organ gallery against the western gable, built for the first organ 1910-11.The present organ was installed in 1992. Among other inventories may be mentioned two votive ships, one of which from the 18th century, a glass chandelier and two brass crowns.

The font of the church.

The most remarkable object is, however, the bowl of a baptismal font, dating from the early 13th century, made of Gotland limestone. According to tradition it had been walled into the medieval church preceding the present one.

The site of the church has a long history, which is difficult to interpret. It is perhaps best known for the foundation of one of the three Franciscan monasteries in medieval Finland. Extensive excavations on the site, however, point to some kind of activity as early as the end of the 13th century. The mention of the name Kökar in the Danish Hedeby Itinerary from the end of that century indicates that the region, above all Hamnö, was already a well-known harbor along important routes.

The excavations also point to the latter part of the 14th century, possibly even earlier, being the probable date for the erection of the first stone church on the site. The church had one nave, with a narrower rectangular chancel, but otherwise had almost the same dimensions as the present one. Around 1400 a solid part of the building was added against the western gable, which is most likely to be seen as a west tower. The medieval church had seven windows. At least the chancel window had stained glass in mullions of limestone. There were also five door openings and a larger opening between the tower and the nave. The roof had u-shaped pantiles of so called monk- and nuntype. It has been possible to investigate minor parts of the building, above all the chancel and the supposed tower, and here a number of graves have been found, giving 14C dates to both the 14th and the 15th century. The fact that the relatively large church building was placed on a small island, separated from the three main inhabited islands of Kökar, indicates that the church was not exclusively intended for the needs of the Kökar people. 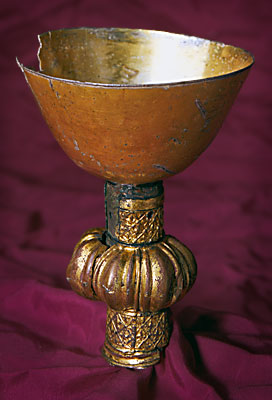 The silver chalice from the 14th century. 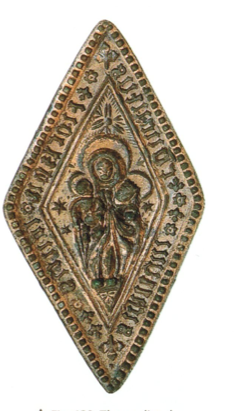 The seal of the Franciscan convent, representing Saint Anne.

The Franciscans probably settled in Hamnö as early as the 14th century, but a proper convent seems not to have been founded until the middle of the 15th century, when they took over the church. There are several relevant background factors for the settlement: the strategic situation along important routes, the harbor of Hamnö with its long traditions, and not least the very extensive fishing that took place in the Kökar waters. Few details are known about the activities of the Kökar monastic establishment, but judging by sparse documents from 1472 up to 1526 it seems to have been a complete convent. The simple lodgings lay north of the church and extensive excavations have revealed foundations of kitchens, refectories, cellars and precinct walls. A rich assortment of finds has also been revealed, among others large numbers of late medieval silver coins, especially Swedish bracteates but also Baltic coins.

The activity in the Middle Ages was, however, not restricted to the monastery area. A little south of the church two larger areas of habitation have been investigated, with finds dating from the end of the 14th century up to the Reformation. There had been large wooden buildings on strong stone foundations, all of them having lavish roofs with u-shaped pantiles, a clear division of rooms with fireplaces, and in part floors with carefully made stone paving. The real functions of the buildings and their relations to the monastery are, however, still rather unclear. Otherwise, Hamnö has remains of at least two harbors with simple quay constructions, and in the south the foundations of a little seafaring chapel described below.
In the 1530s the convent was closed due to the Reformation, and the buildings soon began to decay. A hundred years later the former convent church was a ruin with collapsed vaults, and the Kökar people were forbidden to have their services in it. Instead a little wooden chapel was erected in 1645 on the churchyard. The following year an altarpiece depicting the Crucifixion was acquired which is still preserved.

After only one century the chapel, too, was in bad shape. After discussions continuing for many years the parish finally decided to build a new stone church on the foundation of the old one. Large parts of the remaining walls were torn down, and with the help of two national collections and a large donation from the Stockholm fish buyers, the new church was ready in 1784. Originally, the idea had been to preserve the old rectangular chancel form (Cf. Fig. 61), according the plan of Anders Hartlin-Piimänen, but after a change of architects a more modern three-sided chancel was chosen. After that the church has remained largely unaltered to the present day. The only changes have been to tear down a little wooden sacristy in 1876 and replace it by the present stone sacristy. At the same time a little wooden hall was pulled down in front of the southern entrance. Internally the organ gallery was added in 1910-11 and in the 1930s new benches were installed. 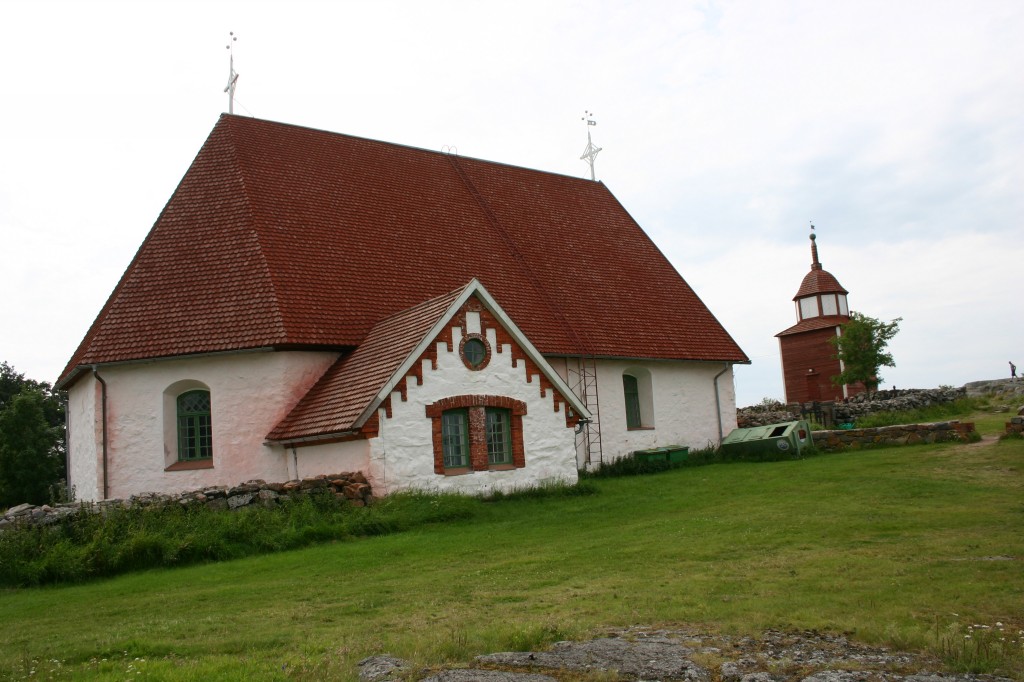 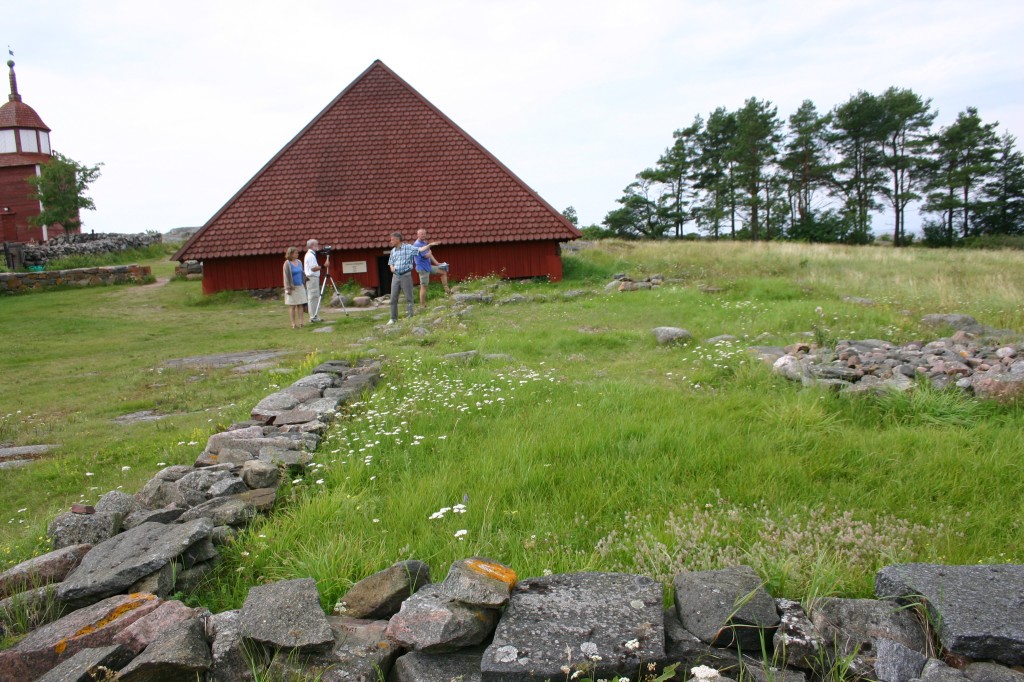 The convent ruins, the cellar.

On the south side of Hamnö, in Kappalskatan, there are remains of what has been thought to be a little medieval seafaring chapel. The building was wooden, erected on a stone foundation filled with mortar, measuring 5 x 7m. In the east there was a chancel window with glass intarsia in leaden window bars. Isolated pieces of u-shaped pantiles are indications of a tiled roof. Outside the foundation there is a precinct wall nearly a meter high measuring 19 x 24m, with clear openings to the west, north and east pointing to possible harbors. It has long been thought that this chapel, like corresponding buildings in the archipelago, could be linked to the Danish Itinerary route and the early Middle Ages. Recent findings of glass intarsia and possible tile roofs, however, rather point to the late Middle Ages. Preliminary 14C datings even seem to indicate that the chapel was used as late as the beginning of the 16th century. The real age and activity of the chapel, and its links to the convent church nearby are thus still unsolved problems.

On the northern side of the present church there is today a modern chapel. Inside are remains of a stone cellar, which was part of the monastery grounds, the so-called

Klosterkällaren. The cellar was excavated in 1974, and two years later a protective roof was built over the ruin. In connection with the first ecumenical Franciscus Festival the building was consecrated as a Franciscus Chapel. Inside on the northern side there is an altar with an altarpiece in stone mosaics, and on the southern side an exhibition with finds, pictures, and texts from recent archaeological excavations.