Lemböte chapel stands high up on the Lemböte mountain on the eastern shore of Slemmern, the stretch of the sea east of present-day Mariehamn.

“Linaboete” is mentioned in the so-called Danish itinerary, written down some time in the middle of the 13th century, but there is no mention of a chapel. Thus Lemböte lies along the old sailing route, which according to the Danish itinerary started at Utklippan in Blekinge (in former Denmark), to Tallinn in Estonia. The chapel, consecrated to Saint Olof, of medieval origin, was situated at a natural well-sheltered harbor called the Western Harbor, or the so called Chapel Bay.

Exterior from the northeast. 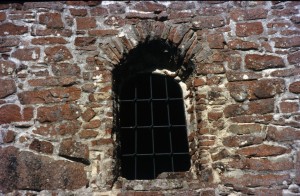 Detail of the chancel window.

The chapel, erected in rapakivi, is partly in ruins. A highly placed window in the east gable is fairly well preserved, with a crowning arch lined with granite chips. A 20 cm long piece of the original limestone framework, with a groove for the window glass, is still wedged into the top of the window. The east gable also has a cavity from a now lost tie-beam. Another window opening can be discerned in the eastern part of the south wall. Centrally in the west gable is the entrance to the chapel. Like the rest of the ruin it has gone through a substantial restoration. The walls of the chapel are sheltered by a wooden roof. Missing parts in walls and gables have been substituted by wooden constructions.

Ground plan by Reinhold Hausen in 1871.

The chapel consists of only one room measuring 7 x 5.3m. The spacious churchyard is surrounded by a circular dry wall of fieldstones. It has two openings, one to the west, and the other to the southwest.

In the stripped interior a niche in the east gable wall catches the eye. The altar arrangement is a late reconstruction.

Mortar samples, taken in the summer of 1996 in the cavity on the eastern gable, indicate that the chapel either belongs to the end of the 13th century or to ca 1370. Both these dates correspond to a hoard of coins discovered in October 1840, “on the western side of the partly preserved eastern gable”, i.e. immediately close to the eastern wall. Some sources even mention that it was found under the altar. A few weeks later the treasure was published in Åbo Tidningar. It included 270 coins in total. They were numismatically checked in Stockholm by Bror Emil Hildebrand, after which they, alas, partly disappeared into the unknown. Another 273 coins have been registered from Lemböte chapel, 55 of these were of medieval origin. Among those that could be identified twelve coins belonged to the first half, and five to the latter part of the 13th century. Fourteen of them date to the 14th century. The oldest coins may be interpreted as artifacts from an earlier wooden chapel, since the results of mortar dating do not reach to the beginning of the 13th century.

After the Reformation the chapel was closed, and the liturgical vessels were confiscated. The decay started immediately. In a report from 1674 the vicar of Lemland, Mathias Benedictij Hedemorus, described the situation as follows:

From the mother church ½ mile, at a village called Lemböte, is a stone    chapel, which old people call Saint Olof’s chapel. It is said to be 12 ells long and 8 ells wide: The altar can still be seen, but the roof has long since fallen off; inside and outside surrounded by birches.

In 1871 Reinhold Hausen photographed the ruined chapel, and the restoration works were initiated in the 1880s under direction of the architect Allan Schulman. The chapel has repeatedly been restored, and is used today both for worship and for concerts.