Lemland church lies in Söderby, adjacent to the largest Iron Age grave field in the parish, not far from a sheltered harbor towards Lumparn, the inland sea of Åland. It was long thought that the church was consecrated to Saint Birgitta and that it dated from the 15th century, but archaeological excavations and a renovation in the 1950s revealed a much older church, with an earlier wooden predecessor.

The chapel of Lumparland was subordinated to the Lemland mother church, while the relation to the seafaring chapel of Lemböte cannot be clearly established. 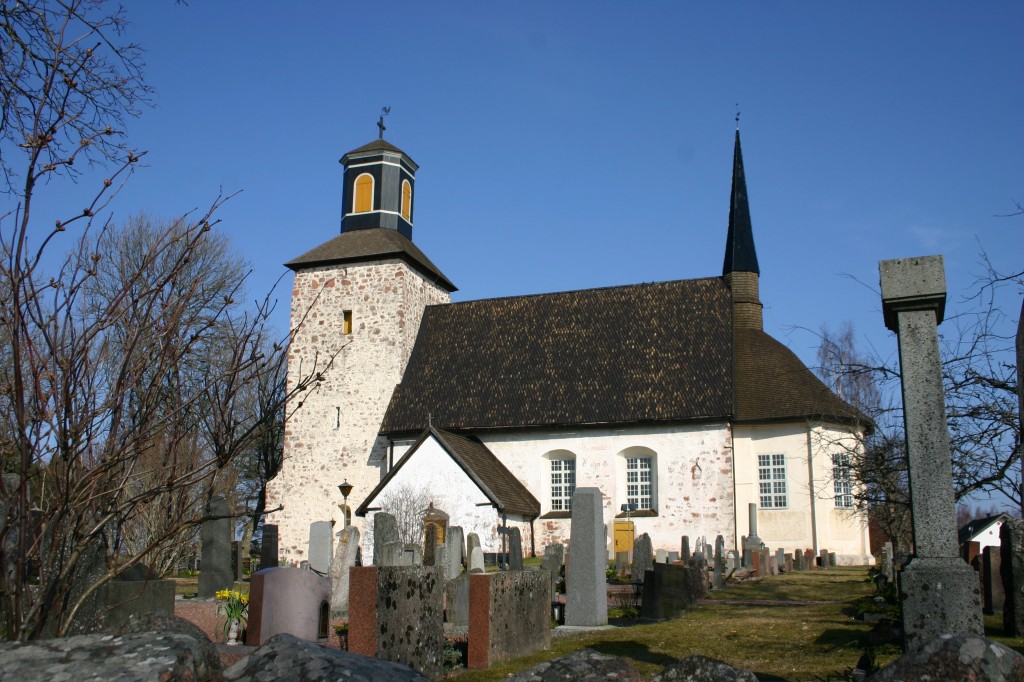 Exterior from the southwest.

Like other Åland mother churches, Lemland church is built of Åland red granite, or rapakivi. The simple stepped socle surrounding the rectangular nave clearly shows that the nave is the oldest part. Joints in the walls and the lack of a socle confirm that the west tower, porch, sacristy and a polygonal chancel towards the east are of a later date. An impressive tower has been erected against the west gable of the nave, and a little sacristy is added to the eastern part of the north wall. The porch is situated to the west of the south wall, towards the original main portal. Towards the east of the same wall a priest door to the chancel has been blocked up. Big windows break through the walls to south, north and east. Because of the ridge turret placed on the joint between the nave and chancel the church has an unusual silhouette. Today the entrance to the porch serves as the main portal to the church. 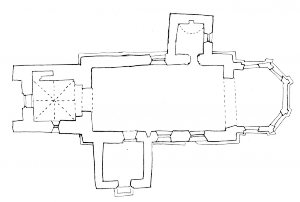 The rectangular nave measures 18.6 x 11.4m. The walls are around 1m thick. Several different building units have been successively added to the nave, such as the tower in the west, the porch in the south and the sacristy in the northeast. The nave opens towards a polygonal* chancel in the east through a wide opening. The outer walls of the chancel are broken up by large window openings. The southern entrance of the porch is the main portal. The other entrance in the west wall of the tower is of subordinate importance. 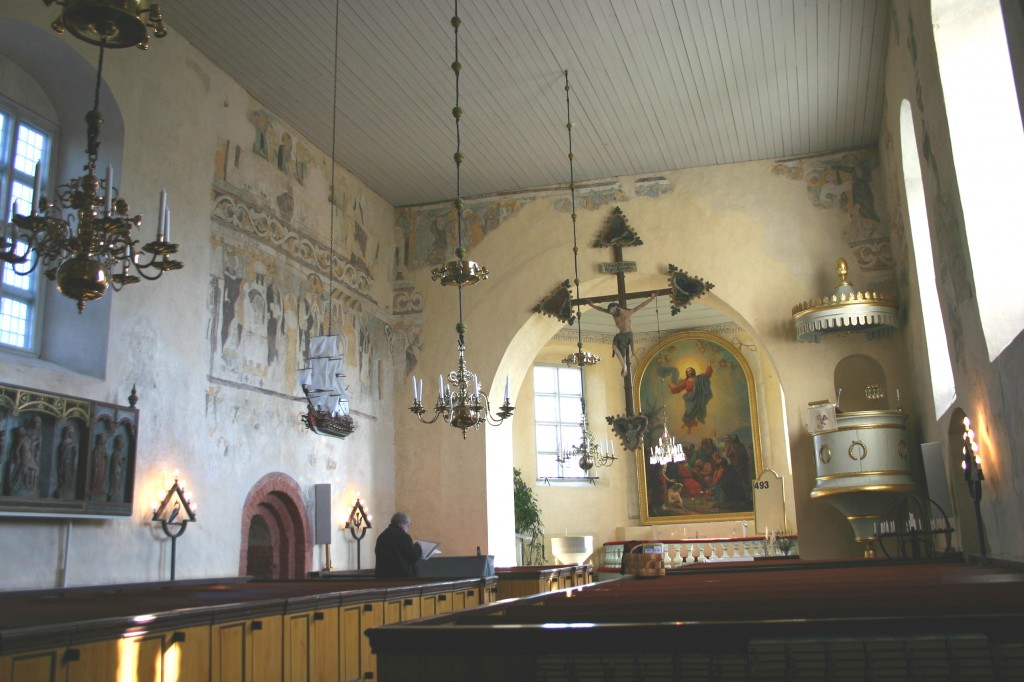 The high nave, a rectangular hall church of around 136 m2, has a horizontal ceiling of white-painted wooden panels. The nave and the chancel are joined by a high arch, while a lower arch opens the nave to the ground floor of the tower in the west. The original division of the nave into a chancel part and a congregational part appears clearly: the wall paintings of the chancel, in many horizontal layers on top of each other, are abruptly broken off where the congregation part starts. The chancel formed a little more than a third of the nave 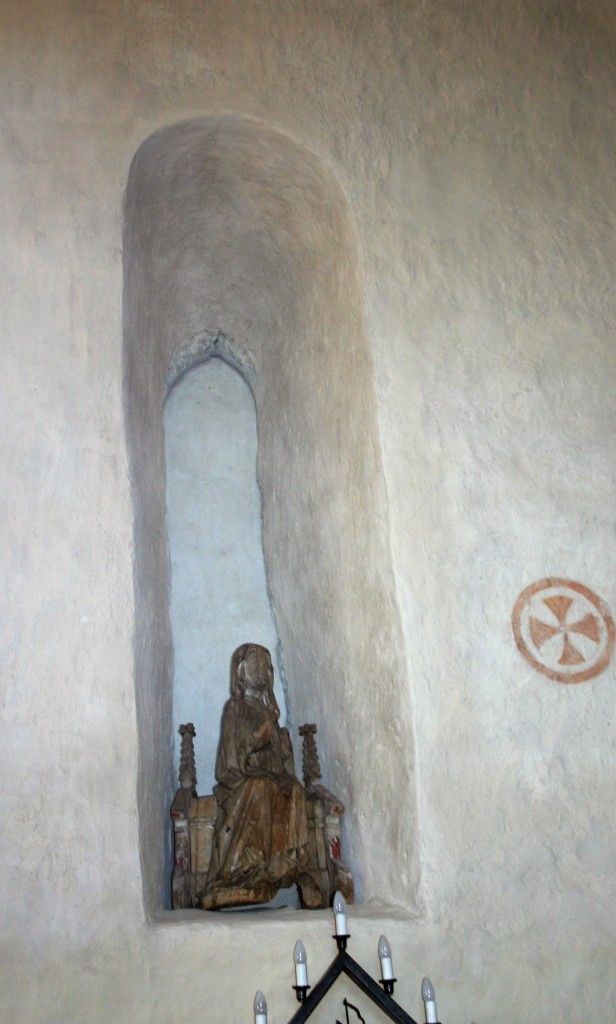 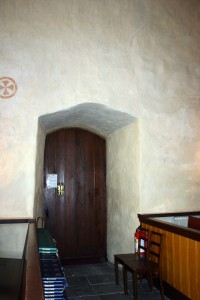 An original window opening is visible high up on the south wall. It is a tall and narrow, with a pointed arch and framed in limestone, which has been blocked by the later porch. Similarly, towards the west, the secondary tower blocks another early window.

A triangular arch finishes the south entrance of the nave, the original main portal into the church, with a rounded shape at the top. The use of bricks is restricted to the sacristy portal, which is framed by three recessive rounded arches. The court painter R.W. Ekman made the present altarpiece representing ‘The Ascension of Christ’ in 1876. The pulpit, attached to the southern part of the triumphal wall, dates from 1852.

The foundation of a wooden church was discovered during archaeological excavations of the church in the 1950s, a little obliquely close to the northern long wall. The age of the wooden church is uncertain, but the oldest coins excavated point to the early 13th century. One result from dendrochronological analysis yields the 1240s, but otherwise dendrochronology indicates 1290 or thereabouts for some of the wooden beams.

The wooden ceiling of the nave and its decorative ornamentation can dendrochronologically be dated to the end of the 13th century, which corroborates the dating of the Gothic wall paintings of the chancel. Only five fragmentarily preserved planks remain of the original ceiling, but the paint is clear enough to show that the ceiling had been covered by fine medallion painting.  The insignificant thickness of the walls and the wall paintings reaching up to the horizontal ceiling demonstrate that vaulting was never intended for this nave. 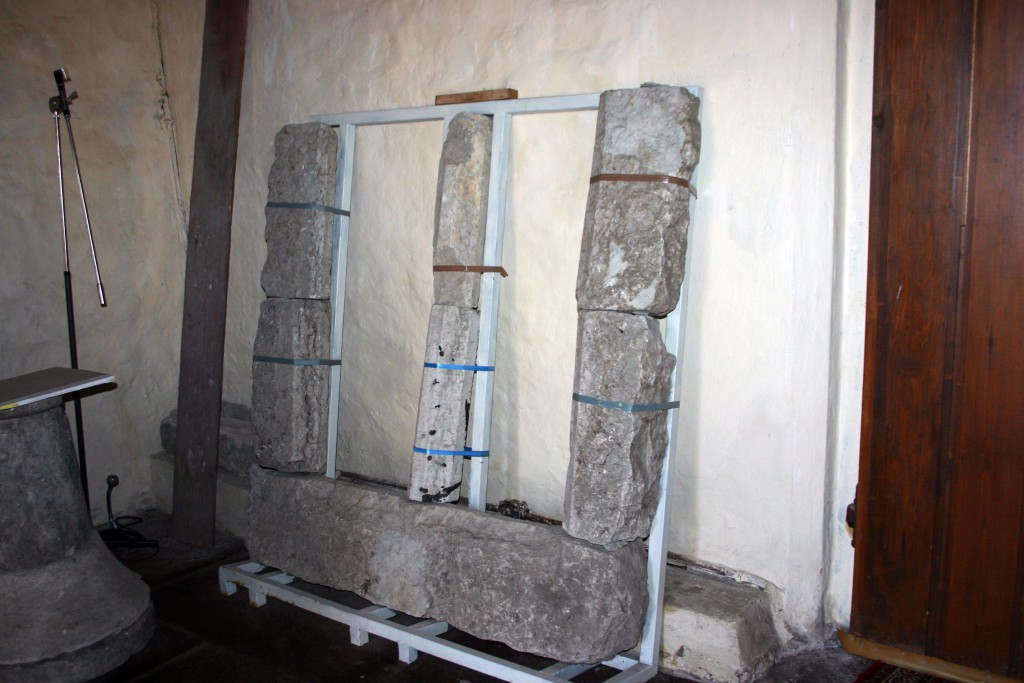 Fragments of the chancel window, found during archaeological excavations, are preserved in the porch. Dendrochronological analysis and mortar dating have further shown that the west tower was built around 1317, and that it reached up to the spire in the first building stage. The original shape of the spire is unknown, but in all likelihood it was formed as a pyramid. Single wooden samples from the wall plates of the sacristy and the porch have been subject to dendrochronological analysis. Both seem to belong to the beginning of the 14th century. 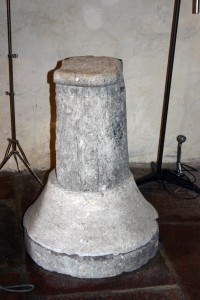 The foot from a medieval font of Gotland limestone was discovered in archaeological excavations in the churchyard. 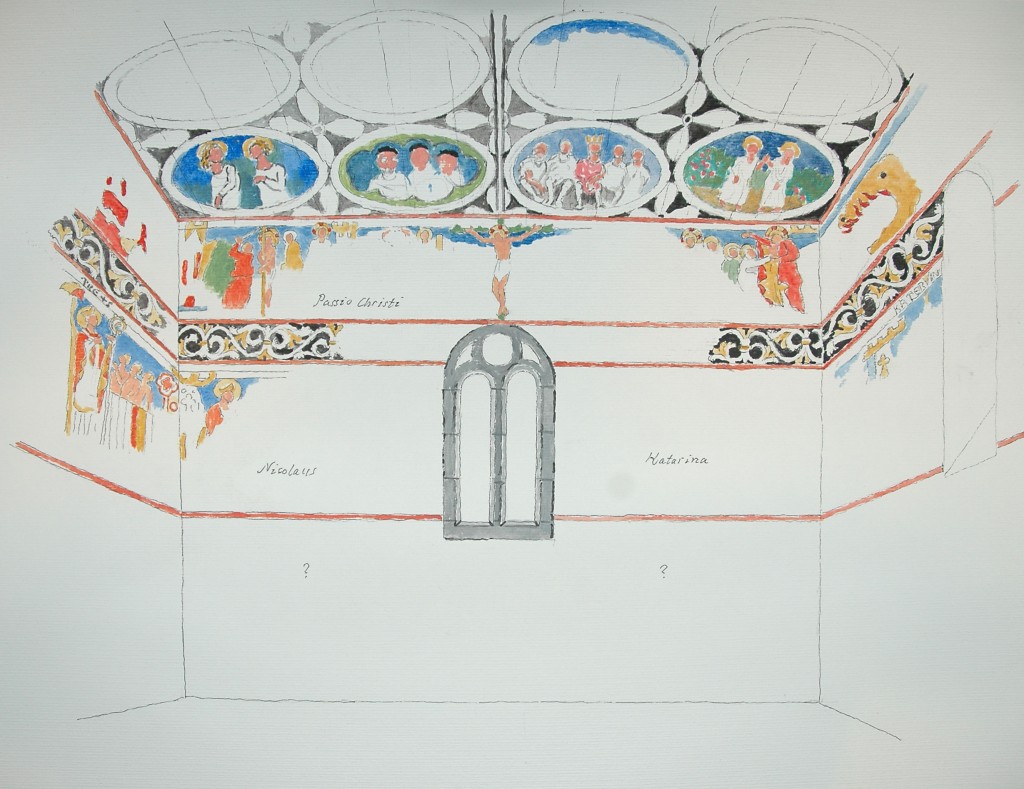 Reconstruction of the interior of the Lemland nave, towards the east. Bo Ossian Lindberg. 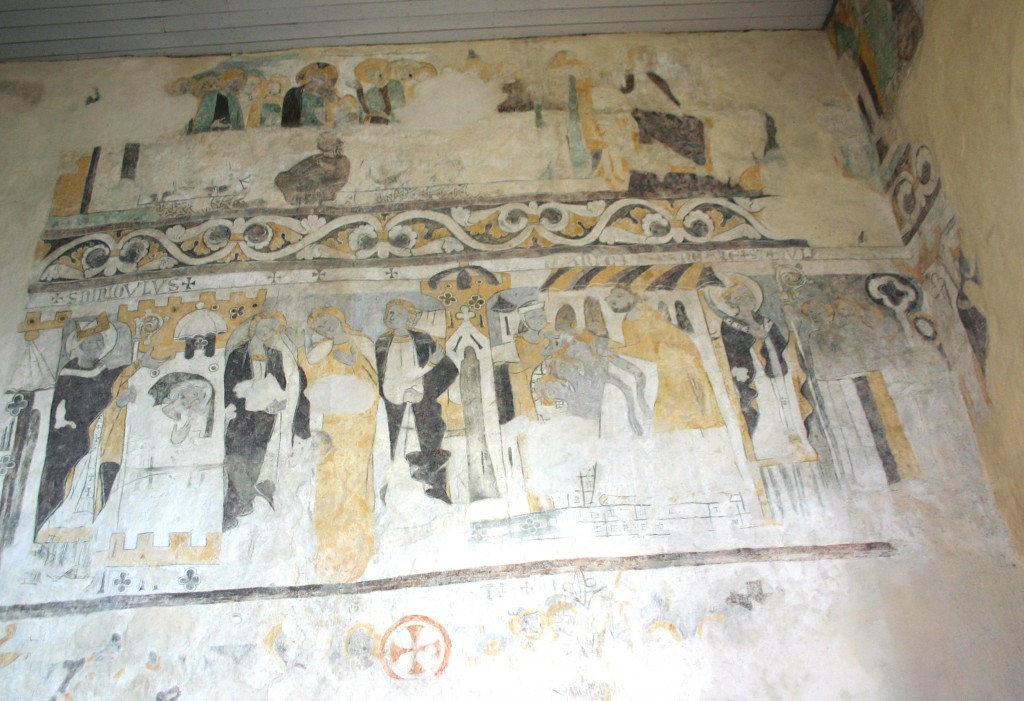 The northern wall of the chancel, the Last supper, and the legend of Saint Nicholas of Myra 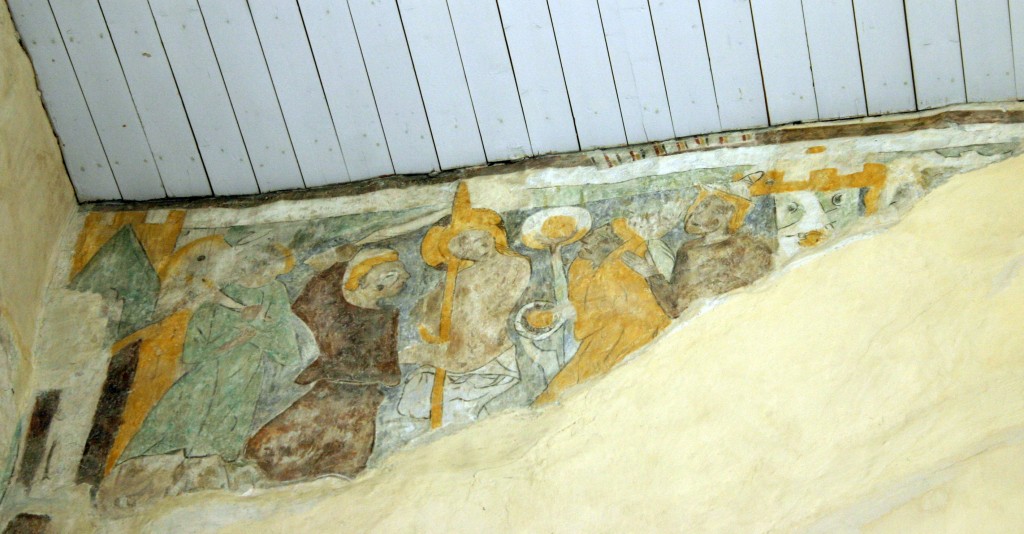 The eastern wall of the chancel, The Passion 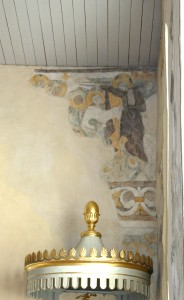 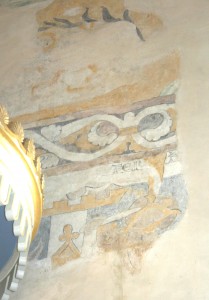 Mary Magdalene, and Noli me tangere.  The martyrdom of Catherine of Alexandria.

The medieval wall paintings of the church were uncovered by Veikko Kiljunen  during the renovation of the church in 1957. Originally the chancel had richly colored wall paintings in three horizontal sequences, separated by ornamental friezes in an archaic style. High up to the north successive narrative scenes represent the Last Supper. Underneath follow scenes from the life and miracles of Saint Nicholas, bishop of Myra. The top of the eastern wall depicts the Passion Series, of which it is still possible to discern the Flagellation, the Crucifixion, and Mary Magdalene in the scene of Noli Me Tangere. The miracles of Saint Nicholas in the middle sequence on the eastern wall were demolished by the opening of the new chancel in the 18th century. Due to secondary window openings, only a few details of a saint’s legend can be discerned on the south wall of the chancel. The inscription CATERINA indicates scenes from the life of Saint Catherine of Alexandria. The series probably started south of the chancel window. 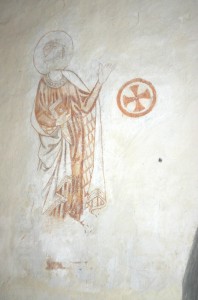 The wall paintings in the congregational part of the nave are very different. Here solitary apostle figures are depicted close to inauguration crosses. The figures are elegantly painted in red against the white plaster. Only Andrew has been identified through his symbol, the X-shaped cross. 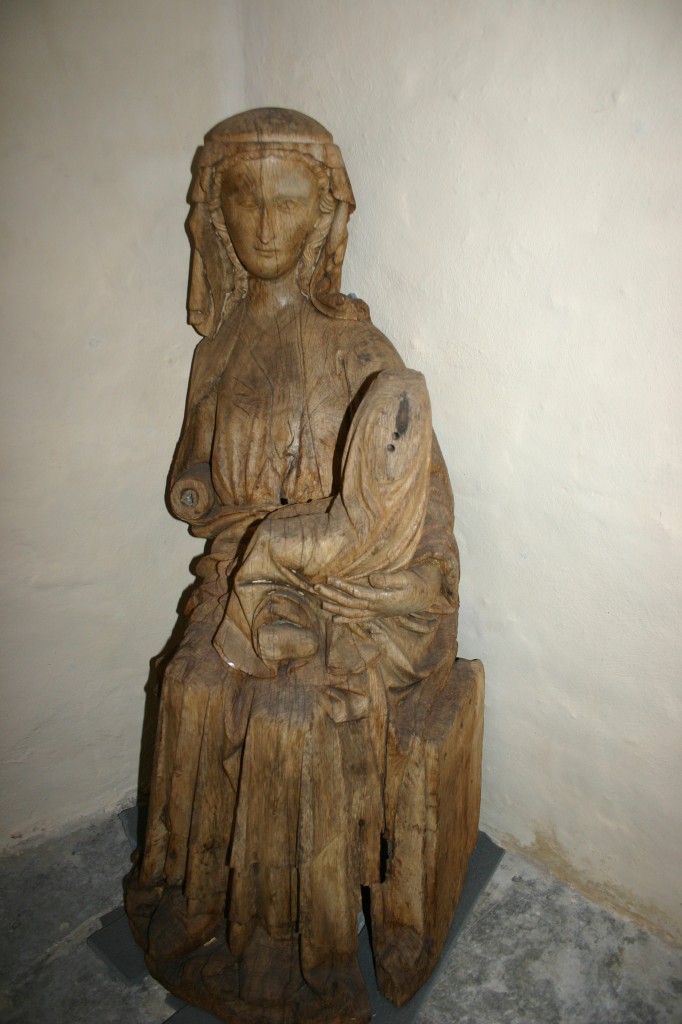 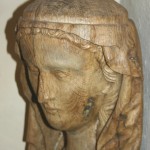 Madonna Enthroned, with the Child Jesus, from the 1320s is the oldest preserved wooden sculpture of the church, and also one of the finest sculptures in Åland. She originally had a golden crown and was brightly painted. 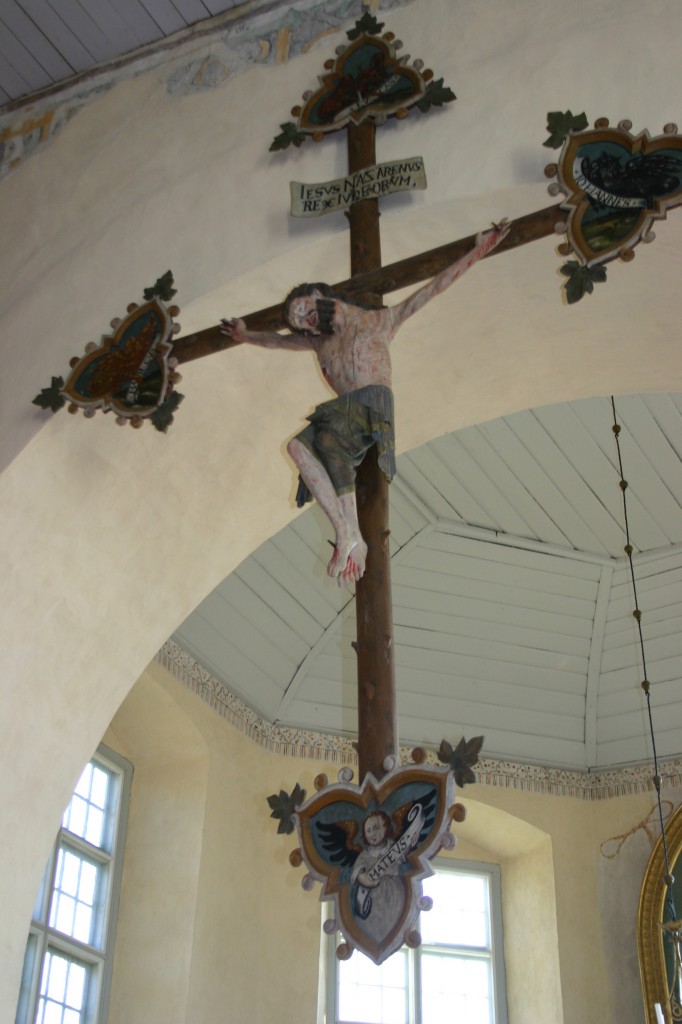 The crucifix in the secondary triumphal arch is an excellent example of so-called suffering crucifixes from the Cologne area in the middle of the 14th century. 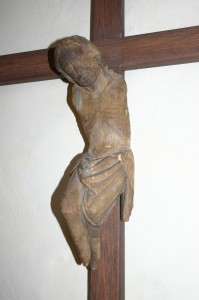 The little crucifix in the niche by the walled-in priest door in the south may possibly be a Gotland work from the mid-14th century.

The sculpture of Saint Birgitta, in the walled-in western window of the nave, is from the 15th century, when, apparently to conform to the prevailing fashion, the church was consecrated to the popular Swedish saint.

The altarpiece, now hanging on the northern wall, dates from the middle of the 15th century. Its niche skewing inwards represents East Prussian traditions. In this reredos, probably acquired for the new inauguration of the church with Birgitta as a patron saint, Birgitta is honored together with the older patron saints: The Pietá in the middle is surrounded in the corpus by John the Evangelist and Mary Magdalene. The west wing includes the Swedish saints Erik and Birgitta, and the left wing Saint Catharine of Alexandria and Saint Nicholas, i.e. identical to the saints in the painting program of the chancel. On behalf of Admiral Bergenstierna from Haddnäs the altarpiece was equipped with a new crowning piece, representing the Last Supper at the same time as it received a new layer of color.

Two small sculptures, one representing Saint James as a pilgrim, and the other a bishop, possibly Nicholas, are late medieval.

Immediately after the Reformation the interior was renewed with a pulpit, pews, a bishop’s throne, and the lectern. All this was, however, due for repairs as early as 1637, in connection with a new chancel screen. The interior was whitewashed for the first time in the 1660s. The altarpiece, the crucifix, the lid of the font, and the built-in chairs were also improved. Dean Boetius Murenius who made visitations to the church, remarked on the votive ships that “the many ships should be removed and the biggest one should be painted and kept clean.”

The lower polygonal extension to the east was built in the 1670s as burial chapel for Admiral Johan Bergenstjerna and his wife Kirstin Persdotter from Haddnäs Estate. This burial chapel was transformed into the main chancel of the church in 1775. The original east chancel wall was demolished to be replaced by a high arch towards the new chancel. A gallery screen, decorated with pictures of the apostles, probably also dates from the 18th century. During the 19th century a number of changes were made. The spire of the tower was renewed in 1817, according to designs from Stockholm. In the 1840s the southern windows were enlarged, at the same time as the priest door was walled in. These alterations also involved the opening of a window to the north.