The red-painted wooden chapel, belonging to Föglö mother church, lies on the southern tip of Sottunga island, far from the other habitation.

Outside the churchyard the belfry stands isolated on the other side of the road running from the ferry harbor in the south to Sottunga village further north.

The red little chapel is a short wooden building with an unusually high gable in the west. The top of the gable is shingled. The same red shingles cover the steep high roof. A low porch, or rather a hall, forms the entry in the middle of the west gable. In the north a little windowless sacristy connects to the church. Towards the east the chancel wall forms a three-phased conclusion to the rectangular plan. Six uniform windows face east, south, and north. A three-phased, or semi-hexagonal, chancel in the east forms a special ground plan for the single nave measuring about 12.7 x 7.8m. Numerous windows are uniformly placed around the walls. Only the west gable and the sacristy lack fenestration. 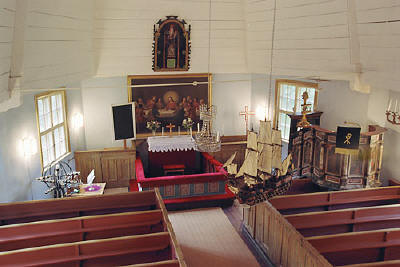 The interior of the church is quite light. The unusual proportions are enhanced by the inner barrel vault. Its height of eight meters doubles the height of the surrounding walls. The pulpit in the south, signed by Jonas Bergman in 1753, has paintings of the apostles, with Peter and Paul flanking Christ. The altarpiece representing the Last Supper, painted by P. Berggren in Stockholm, was acquired in 1845.

The chapel is first mentioned in 1544, in connection with Gustavus Vasa confiscating its copper bell. Vague information from 1658 that income was needed from the offertory boxes to finance the chapel has been interpreted as referring to new building activity. Three years later Dean Boetius Murenius in his visitation records describes a medieval interior, with much to criticize. According to him a log stretched across the entire church. Over the altar “there were many old and broken superfluous images”, and “The log and the ugly images must be removed, except for the crucifix,” etc. The citation implies a medieval arrangement with a trabes, a cross log above the church space, to mark the transition between chancel and congregation.

According to Murenius the log carried a crucifix flanked by other wooden sculptures – an obvious Calvary group, with the crucified Christ surrounded by Mary in mourning and John, the apostle. Everything had been left in disrepair: the windows by the altar, the book stool and the pulpit were badly carved and awkwardly fitted into the wall, the altar too low. Carpenters were to be called in to make a new church door, the desk for the altar, a pulpit with stairs, and an altarpiece below the window. Murenius further ordered the windows by the lectern and the pulpit to be enlarged and the altar raised.

The churchyard had no gate, and in 1692 it was time to change the window frames. An old altarpiece was procured from Geta chapel in 1709 at a cost of 6 ”riksdaler.”

In 1711 there was a complaint that the road from the village to the chapel was wet, rocky, and marshy. The chapel was in a state of decay and needed considerable repair. Preferably it should be moved closer to the village, to a place called Källnäs. The move should be made in the wintertime when sledges could be used.

Everything however points to the move never taking place, and that the chapel still stands on its original site. The accounts state that the only thing happening was that the crucifix was painted and gilded the following year. Also, boards were acquired to repair the roof, at the same time as the windows of the chapel were seen to.

All plans to renovate and move the church came to nothing because of the Northern War, when inhabitants from Sottunga, like other Ålanders, fled to Sweden from the enemy. Two independent sources from 1726 confirm that the chapel had burned. In a commentary to the inventory list after the homecoming it is said that the enemy had burned the altarpiece as well as the chapel. The money for a new building was, however, in safe keeping in the chapel chest. “Vicar Stålbohm must ensure that the chapel with its loans is secure in the chapel chest, kept by the vicar, which money they intend to use for building a new chapel instead of the former chapel, burnt by the enemy.”

In 1730 it is said, “the new chapel, which had been built on its former site, had been installed and its doors, windows and floor renewed.” What remained was the hall with the chapel door, i.e. the main entry, as well as the fixtures: pulpit, priest benches, the top desk for the altar, and pews. The repairs should be financed by collects from the offertory box on Finnö. The chapel should be tarred and painted red. In 1735 timber was acquired for the campanile. According to F.W. Radloff in 1795, the chapel was almost square-shaped, 14 ells long and 13½ ells wide (8.25 x 8m). The belfry was considerable in size and contained two bells, the bigger with the following inscription: “This bell was bought for Mary Magdalene Chapel in the parish of Föglö in 1769 and it was recast in November 1781”.

It was once more time to decide whether to replace the decayed church with a new building, or whether a renovation would be sufficient. For financial reasons the latter option was chosen, “with the addition of new timber”. Carpenter Eric Lindström was in charge of building a new chancel, which had previously been lacking. In 1802 the chapel was elongated by 7½ ells (a little more than 4 meters), thus receiving its definitive ground plan with its three-phased finishing to the east. At the same time the high wooden barrel vault was constructed. In 1843 a wall in stone replaced the old wooden wall around the churchyard. The belfry was extensively repaired in 1853.

The votive ship from Sottunga.

The pulpit from Sottunga chapel church, signed by Jonas Bergman in 1753.