The church in Vårdö, or Sundsskären, consecrated to Saint Matthias, belongs to Sund mother church. It is situated on the main island a little bit away from other habitation. It was built just south of the Åland postal road, in the middle of the triangle between Vargata, Vårdöby, and Listersby. During many centuries the chapel has gone through considerable changes and enlargements. Today it is possible to reconstruct the different stages of the building. The place name Vårdö is first mentioned in 1347. 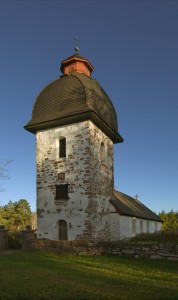 Exterior from the southwest, and the east gable.

The western part of the low, oblong and whitewashed chapel has a later narrow tower, roughly built and with a disproportionally large spire, the result of a radical enlargement and rebuilding in the 1780s. The spacious sacristy approximately in the middle of the northern façade, with the year 1786 inscribed in the gable, is not joined with the nave. The chancel wall towards the east has no windows. Four large and widely arched windows face south. Two identical window openings flank the sacristy towards the north. There is no separate porch. Instead the entry to the chapel functions as a porch in the ground floor of the tower. The main entrance sits centrally in the west gable of the tower, continuing the central axis of the nave. The northern wall plate has been elongated immediately west of the sacristy. 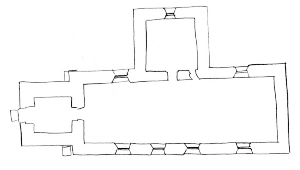 The long rectangular ground plan has a vaguely trapezoid shape, where the chancel wall towards the east is somewhat wider than the corresponding west wall (inner measures ca 19.5 x 7/6.3m). The sacristy is not joined with the north wall of the nave. The bell tower was added later to the west gable of the nave.

Interior to the east.

The single nave interior is flooded in light thanks to many large window openings, light inner walls and a high barrel vault. The color scheme is a cool white and blue. The nave, with an inner space of 198 square meters, reveals no traces of medieval wall paintings.

The altarpiece with the theme ‘Christ in Getshemane’ was ordered from the court painter Robert Wilhelm Ekman in Turku in 1852. A vaulted passage from the sacristy leads up to the pulpit from 1794. The organ gallery along the western gable was installed in its present location in 1785, just after the nave had been enlarged. Zachariasson in Uusikaupunki built the organ in1889. The lower part of the tower functions as a porch.

Interior to the west.

Many different types of scientific analyses confirm that the chapelry of Vårdö got its stone chapel towards the end of the 15th century. The medieval origin is also indirectly shown in many ways: The big bell from Saint Matthias’ chapel was confiscated in the 1540s. Reports from 1590 revealed a crack in the dilapidated eastern gable wall showing that the chapel needed maintenance and that it was built of stone. The visitation records from 1644 indicate that disputes on how much the chapel should contribute to the maintenance of the mother church had been going on for a long time. Nobody knew how old the chapel really was, but ‘it seems that the mother church must have been built long before the chapel.’ But the reason for building the chapel was beyond doubt. Since the distance to the mother church was long, and the journey in wintertime could be arduous, the “Christian authorities” had given the parishioners the freedom to build their own chapel, as “it was difficult for old and sick people and for the young to travel the long distance”.

At first the chapel was much smaller than it is today (13.57 x 8.8m, inner floor space about 120 square meters) The walls were low, even if exact measures are unavailable. Whitewashed exterior walls contrasted against the low saddle roof, covered by tarred and chopped boards on birch bark. A bell hood crowned with a spire and resting on four poles, sat centrally like a ridge tower. The chapel had in total three windows: the chancel window on the eastern gable, divided into four sections, and two window openings on the southern wall with three sections each. There were no windows facing north. It is possible that the chapel had a wooden porch from the very beginning, while there was still no sacristy. The main entrance was placed in the western gable. The horizontal inner ceiling was paneled. Contrary to medieval canon law the main altar was made of wood, and adorned by a 15th century altarpiece.

When Boetius Murenius initiated his visitations in the chapelry in 1637, he met a chaotic Catholic medieval interior. The chapel was filled with “rotten old papal tawdriness”.  “Miss-shaped images were installed instead of an altar painting, and junk rags were hanging along the walls”. A big crucifix –”a large body”– hung across the nave, on a crossbeam.

One of Gustavus Vasa’s confiscations in 1544 was a big bell from Vårdö, together with two small bells. The big bell would have weighed about 200 kilos. The Reformation did not bring about any great changes for the church building. On the contrary the Catholic interior was left more or less intact. Still it can be assumed that a simple pulpit and pews for men and women had been acquired as early as the 16th century, in accordance with the new Lutheran liturgy. In 1590 it was necessary to repair a crack in the wall of the eastern gable.

The church was subjected to new alterations when Boetius Murenius ordered a third window to be hewn up in the southern wall, to facilitate readability at the pulpit. He also wanted to remove the old ridge tower on the chapel roof, where the poles contributed to rot in the roof joists. The parishioners, who liked the picturesque ridge tower, objected to the plans and it was left in its place for the time being. The ceiling got horizontal paneling in 1672. The wooden porch in front of the western portal found its form in the 1640s. Approximately at the same time, in 1645, the old wooden altar was torn down and substituted with a new brick altar. Since there at this stage was still no sacristy, a cupboard was furnished in the chancel for the sacramental vessels and vestments. In the middle of the 17th century the pulpit was renewed, as well as the pews for men and women. In 1659 a new wooden sacristy was finally built against the northern wall of the nave, which was broken through for an opening. Since the small chapel was overcrowded, a new gallery along the western wall was built in 1664. A new altarpiece with ‘painted gold and silver’ was ordered from the painter Mårten Johansson in 1666, but its motif is unfortunately not known. In the 1690s a new wooden bell tower finally replaced the old ridge tower. The tower was built against the western gable, probably with the earlier wooden porch as ground floor.

Drawing for an enlargement of Vårdö church, signed in the 1780s by the court architect Olof Samuel Tempelman, Stockholm.

Enlargement drawing for Vårdö church, by the architect Olof Tempelman at the Royal Super Intendent’s Office, Stockholm, around 1783.

The chapel was badly damaged during the Great Northern War 1714-21, and the following decades were mainly devoted to subsequent reparations. The congregation felt that the chapel was much too small and themselves took the initiative to plans for enlargement. These were to be realized in the 1780s, according to drawings by the architect Olof Tempelman at the Royal Super Intendent’s Office, Stockholm. But the enlargements were only partly realized. After the old western gable with its adjacent wooden tower had been torn down, the nave was prolonged by 12 ells westwards. The porch also disappeared during the enlargement. The eastern gable with the whole ridge was raised by 68 centimeters and the nave got a new high wooden barrel vault. New large window openings were broken through the nave walls, three to the south and two to the north. Daylight came in to a newly built gallery through a round window high up in the western gable. A spacious stone sacristy was erected against the middle of the northern long wall, but it did not follow the drawings. In the 1790s the chapel acquired its present pulpit, designed by Carl Fredrik Adelcrantz of the Super Intendent’s Office in Stockholm, and constructed by Eric Fällström. A simple, new altarpiece was framed, also according to Adelcrantz’ design.

In 1804 the stone west tower of stone was constructed, and thus Vårdö acquired its characteristic tower hood. The builder responsible was Mikael Hartlin Piimänen from Turku. He was severely criticized for not keeping to the proportions of Tempelman’s hood design from 1783. A porch was included on the bottom floor of the tower. To improve readability in the gallery a garret was constructed in

the southern slope of the roof. A fourth window, identical with the others, was opened on the southern façade in 1852. The barrel vault was again raised in 1872, after which it was painted with zinc white. Iron stoves were acquired for both sacristy and nave in the 1890s, when the old shingled roof was replaced by asphalt felt covering.

After a longer period of deterioration during the first half of the 20th century a well needed restoration was initiated in the 1950s. It lasted until 1970. The bulky gallery, which had occupied more than one third of the room, was diminished and received new stairs. The aged heating system with iron ovens was replaced by electric heating. The interior was painted and the armatures entirely renewed.